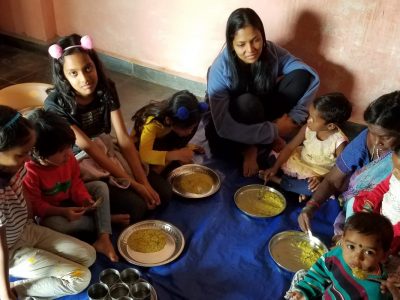 During their winter holidays, Sunita Mani and Srinadh Madhavapeddi, AID volunteers from Dallas, travelled along with their two young children, Anika and Aanya to Bilaspur, Chattisgarh where AID partner Jan Swasthya Sahyog (JSS) has worked for two decades with local communities in remote and tribal villages to advance a holistic approach to health rooted in dignity and timely access to quality health care.  Joining them on this visit were Chetana and Karthik, who had volunteered for AID in Dallas before moving to Bangalore.  Their children, Disha and Tamia came as well. Along with Anika and Aanya, they got to meet some kids, learn new games and observe the rhythms of the day.

Villagers talked with them about the challenges they faced and strategies they were using to overcome them.  Srinadh shared a few entries from his travelogues: 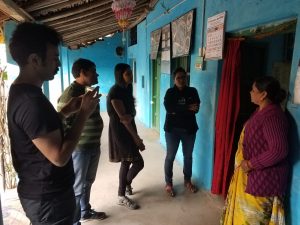 Ms. Janaki, Senior Village Health worker in Shivtarai sub center. According to Dr. Yogesh, if he were to choose a “physician” to treat him when he is ill he would pick Janaki!

We reached Ganiyari at around 3 pm and immediately set off to Shivtarai and Bamhani health subcenters . At Shivtarai we spent time with the senior health worker and the ANMs. (ANM stands for Auxiliary Nurse Midwife and is typically the   first contact person between the community and the health services  She described the typical illnesses she sees as well as new and ongoing challenges with respect to the community health program. Shivratri serves as a hub for around 25 forest fringe villages, many of them Adivasi Gonds. From there we drove with Praful, who is a program coordinator in community health for JSS, to Bamhani which lies in the Achanakmar Tiger Reserve, deep in the forest. Bamhani again serves around 25 villages and these are primarily the Baiga Adivasis who are often more isolated. Getting to Bamhani is quite a trek even for healthy visitors driving in an SUV and sure enough after crossing three checkpoints and crossings the riverbed, our SUV had a flat tire!

Imagine the difficulties of accessing healthcare when not healthy and having to cross all these barriers which the Baiga people have to everyday. We talked with Santosh who is the senior health workers at the sub center about the challenges in Bamhani and he described the electricity only being available for 3 hours a day from solar panels that the Forest Department set up as it doesn’t want electrified tribal villages in the Tiger reserve – a classic case of urban wildlife conversation efforts running counter to tribal wisdom and culture of people people living close to nature. He also talked to us about efforts to displace these forest based villages in the name of wildlife conservation – from offering alternative lands which is fallow to just cash compensation with no long term rehabilitation being offered. At the end of the day on our return back to the Ganiyari clinic, we saw many people huddled in blankets from the cold as they await their turn at the JSS Out Patient Department (OPD) tomorrow. We will talk to more people tomorrow …

Today is OPD day at JSS and so one sees a large number of people lining up to get through registration and hopefully for many who have been waiting a long time (up to a week in some cases after long bus journeys from as far as deep in Madhya Pradesh) to get a chance to see a doctor. The dharamshala across the road serves as part overflow and part step down care facility for those with non life threatening illnesses needing to follow up without having the option to travel back to their homes when they are far. 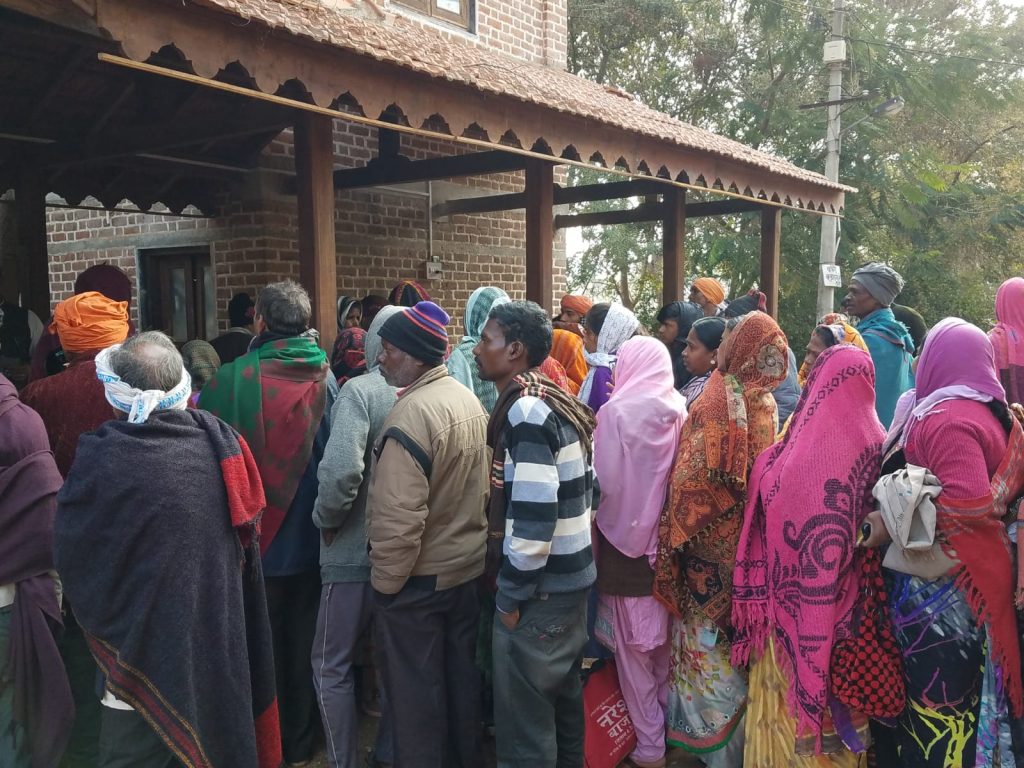 One thing we did talk about together with the girls is that after being bundled in blankets we were still quite cold in the guest rooms above in Ganiyari as winter is on in full swing here and how cold the people who were sleeping on the floor outside the OPD, behind the lab and in other waiting areas for their turn to get care must be.

One of the highlights for the kids was at the Phulwari, or creche in Semariya, where they got to sample the food and the hammocks that the children there use. 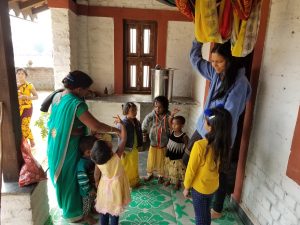 Semariya: kids got to sample the food and the hammocks that the kids have in the Phulwari! Photo: Srinadh Madhavapeddi 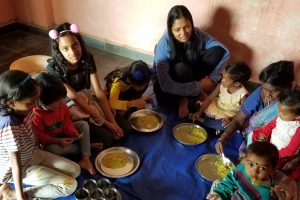 We have lunch with the children at the Phulwari. Photo: Srinadh Madhavapeddi

Will try to wake up early and talk to a few last people before we head back out to the urban jungle. Plenty to think about and reflect upon as is the case after every trip here. There is something alluring about these parts even as one sees so much inequity and suffering along with strength and resilience of the warm people here.