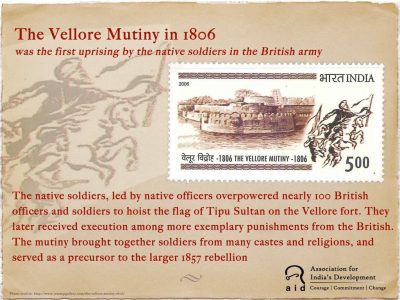 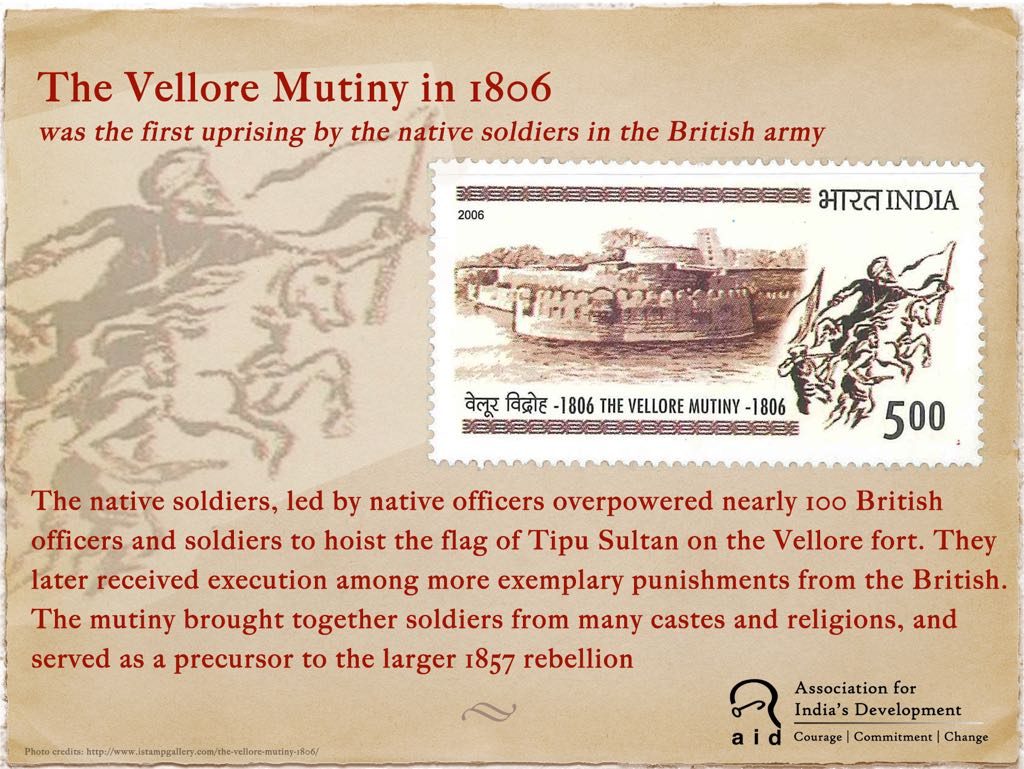 You could almost fail to notice the towns of Arcot and Vellore when you travel between Chennai (Madras) and Bengaluru (Bangalore) on the high-speed national highway these days. About 75 miles west of Chennai, Arcot was once the capital of the region known as Carnatic. Mid-18th century military conflicts, known as the three Carnatic Wars, fought between the British and the French and a shifting roster of their domestic allies, finally ended with the British East India Company establishing its supremacy in the region. Robert Clive, a clerk working for the Compa- ny, achieved his notoriety as a soldier and a strategist after his siege and capture of Arcot in 1751 in the second of those wars. The landscape of Vellore, fifteen miles to the west of Arcot, is dominated by an immense fort built of massive granite stone. Constructed during the time of the Vijayanagara Empire in the sixteenth century, the fort also came to shape the history of the place. It was successively held by the Bijapur Sultans, Shivaji, the Mughals and the Nawabs of Arcot. The British took possession in 1760 and used it as a major garrison. It was from here that Cornwallis (the same Cornwallis who surrendered to George Washington in 1781 resurfacedfive years later as the Governor General in Kolkata.) set off in 1791 in the third Mysore War to  fight Tipu Sultan, the Tiger of Mysore. 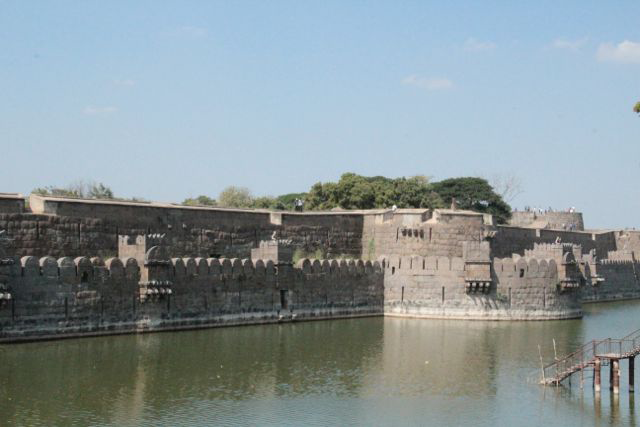 Ramparts and the moat of the Vellore fort

After Tipu Sultan was killed by the British in 1799 in the Battle of Srirangapatnam of the fourth and last Mysore War, his twelve sons and eight daughters, along with other surviving family members and their retinue, were transported to Vellore and confined to a palace within the fort to live under the watchful eyes of a Lieutenant-Colonel and his native sentries. Thereafter, the colonial administration, while continuing annexations of territory, busied itself with revenue extraction and administration, ignoring or dismissing signs of trouble brewing among the natives.

Then, as historian James Mill wrote, “the Governments of India were startled by the occurrence of an event unprecedented in the annals of British India, and inspiring fears for the solidity and permanence of the empire …” Around two o’clock in the morning on July 10, 1806, native soldiers, under the command of native officers, began an assault on the European barracks, over- powering English guards, firing their muskets and bayoneting nearly everyone in sight. Around 100 British officers and soldiers were killed. Soon, the rebels were in control and they proceeded to hoist a flag of Tipu Sultan on the fort. Then they began to loot, raiding the paymaster’s chest and the residential barracks. In their festive mood, they also neglected to guard the gates of the fort.

In the meanwhile, a British military officer who resided outside the fort rushed to Arcot and brought back detachments of the cavalry stationed there, followed soon by horse-drawn artillery. 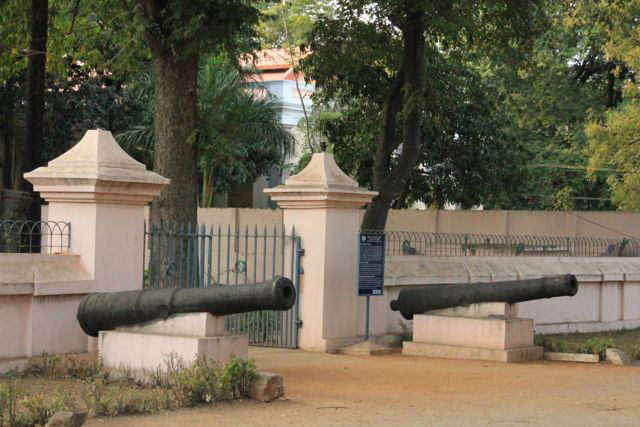 Nineteenth-century cannons now decorating the entrance to the museum on the fort grounds.

By 10am, they were able to enter the fort through all the gates. The mutineers offered little resistance. Hundreds of them, by some accounts more than 800, were slain. The rest tried to escape but more than 600 were arrested and court-martialed. Punishments were exemplary. Nearly twenty mutineers were executed in public. Six were blown away by cannons.

Official inquiries were initiated immediately into the causes of the mutiny. John Cradock, the commander-in-chief of the Madras army, called the whole affair a conspiracy of the princes to restore Tipu Sultan’s dynasty to power. But he could offer no evidence. Even some modern historians, Maya Gupta for example, have tried to make a case for a leading role for the princes in the mutiny. But as even Gupta concedes, the evidence is at best circumstantial and the princes “were never seen during the action nor had they attended the secret meetings and openly preached rebellion.”

What then could have been the real reasons behind the mutiny? In the months leading up to the mutiny, there was growing resentment among the native recruits over poor pay, strenuous military discipline and humiliation by the British officers and soldiers. Disregarding their concerns, Cradock, the commander-in-chief, announced new regulations in late 1805 to standardize their uniforms and appearance. Earrings and religious marks on the forehead were forbidden. Beards had to go and mustachios had to be trimmed. The new uniform included headgear that resembled a hat, replacing the traditional turban. And all sepoys and officers were required to carry on their persons next to the chest a Cross-like turnscrew, used in loading muskets.

Opposition to the new regulations was immediate, vocal and unanimous. The sepoys saw in the new regulations an attempt to impose the practices and the religion of the Europeans. Their resistance was not driven by religious concerns alone. While both Hindus and Muslims wore turban, a hat was seen as European. Topi-wala or hat-wearer was a term of derision for the Europeans. Calls for uniting across caste and religious divides to resist British rule could be heard in the region even at such an early period. Refusal to wear headgear that resembled a hat represented an element of nationalism in the making.

The official inquiry commission concluded by fixing the blame for the mutiny on Cradock and William Bentinck, the Governor of Madras, and recalled them to London. Enforcement of the new regulations was relaxed. Fearing that the presence of the princes in Vellore would provide a rallying point to the disaffected, they were exiled to Bengal and placed under close surveillance near Kolkata. An immense crowd gathered to watch their departure from Vellore.

The other members of Tipu’s family lived out their remaining years mostly in Vellore. Their bodies now lie buried in the grounds of a mosque not very far from the fort. An obelisk outside the fort, installed in 1998, memorializes the Vellore Mutiny as the first spark of India’s struggle for Independence.

[2] The History of British India, Volume I, James Mill and updated and edited by Horace Hayman Wilson, 1858.

[8] The Vellore Mutiny, Alan Douglas Cameron, PhD Thesis, University of Edinburgh, 1984. See, in particular, Marudu Pandyan’s testament before being hung by the British in 1801, quoted in translation on p. 126. The testament was remarkable for its time for its call for unity across caste and religious divides to resist British rule. Widely circulated in southern Madras Presidency, a copy of this was found on public display in the center of Madras shortly after the Vellore Mutiny.