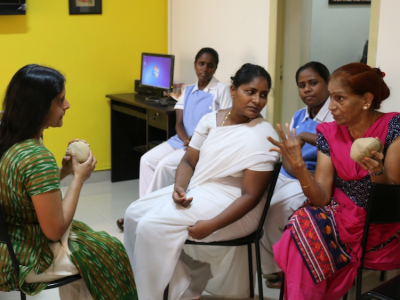 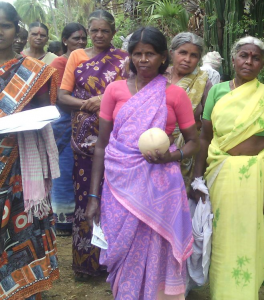 Sundari obliged.  While most of us might use a simple phrase such as “eat foods that are high in fiber,” the trainers at Vasantha Memorial Trust have a more colorful way of putting it.  I gently requested them to reconsider their word choice.  Grinning brightly, they effused, “Eat like a lion and eliminate like an elephant.”

“What this means,” she explained, “is that we should eat only when we are hungry.  Think of the lion.  Even if all the animals are present before him, he will not eat unless he is hungry.”  They include this tip while training women in cancer awareness.  While the central component of the training is the breast self-examination, they also talk about the factors that increase risk of cancer, such as obesity.  While more than 200 million Indians are underweight, the Lancet reported that a growing number of Indians were overweight, 30 million in 2014.

“And what should we eat?” she continued, ” just see the elephant, how much it eliminates, eating grasses and such.  We should eat more vegetables so that for every 100 grams we eat, we eliminate 80 grams.”

Well the numbers may be more figurative than literal but I did look up the elimination habits of the elephant.  Indeed, it is prodigious and has many uses such as dispersing seeds, making paper and other things I had not imagined.

Awareness is a powerful thing.  When you consider how important early detection is in cancer treatment you can understand the zeal with which the team at Vasantha Memorial Trust promotes the breast self-examination. 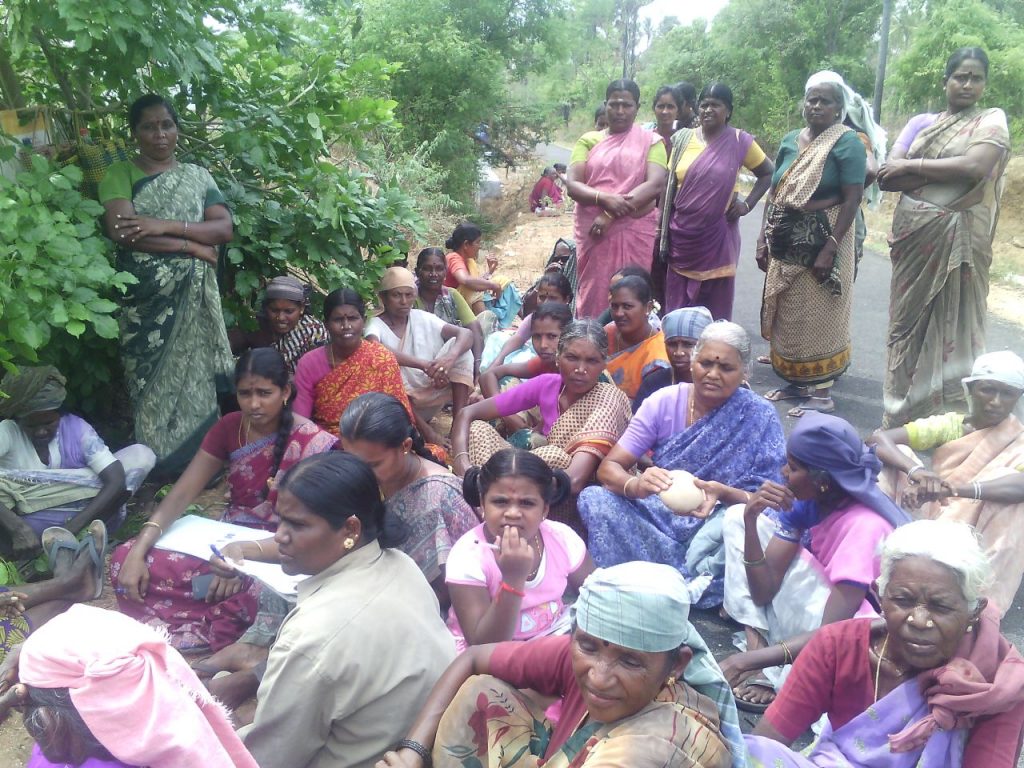 Women in Kuttipatti learn how to perform the breast self-examination for early detection of breast cancer. 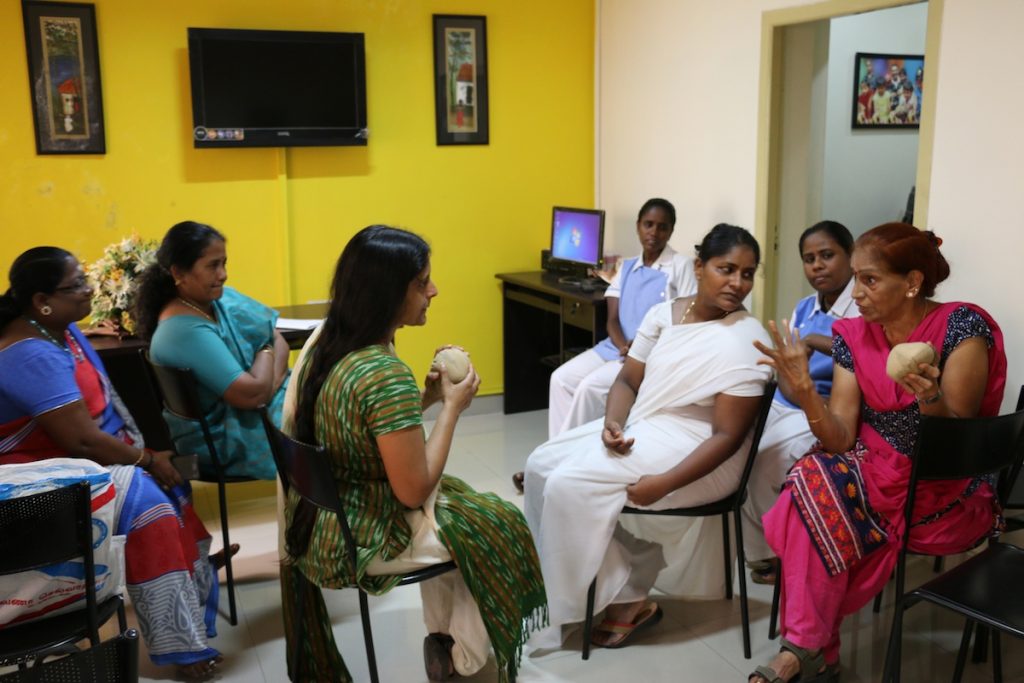 Sundari (right) trains trainers who go to villages and teach women how to do a breast self-examination. From left to right: Shanti, Uma Babusekar, Aravinda (from AID), Kala , Aarthi, Sheela Kishore and Sundari Vishwanathan.

Each trainer explains to women, one-on-one:

Every woman they train takes a quiz to make sure she has understood the value of the self-check as well as the correct way to do it.  At the office they had stacks of thousands of completed questionnaires.  They also ask for phone numbers and do spot checks to make sure women have actually understood.  They use the feedback to follow up with the trainers.

When we visited their center, I asked them to train me.  Though I have seen the notices in doctors’ offices and been doing the checks myself, I learned a few new things such as why one should do this check once a month and not, for example, every day (because one might not detect small differences if one checks daily).

Starting this October, with support from AID,  they plan to train 100,000 women in the breast-self examination over 3 years. Each woman will also compete the quiz after the training and Vasantha Memorial Trust plans to analyze the results and see what they can learn and improve.

How will Vasantha Memorial Trust train 100,000 women to perform the monthly breast self-examination?

VMT will recruit and train women to conduct training in breast cancer awareness and the breast self-exam in particular using a standardized script and demonstration procedure using a hands-on model to use during the training.  Every woman will rehearse the 15 minute talk and demo until they and the VMT staff educator are satisfied.

In the last 3 minutes of the training, the women complete a quiz, ask any remaining questions, and get general advice on cancer prevention.  Each educator submits forms containing the names and contact information of women she trained to the trust office.  The supervisor then makes random phone calls to 10% of the women educated. If she is satisfied with the learning of the women, then she signs off on payment for the educator. The educators receive Rs. 20 per person educated, with increments for every 100 women trained up to 1000 when the remuneration tops at Rs. 30 per person.  The project budget also includes support for people to conduct workshops, enter data and supervise the program.

VMT will conduct training-of-trainers every six months for the duration of the project and aims to reach 100,000 women in 3 years.

Inspired to raise funds for this project, a team of volunteers has climbed Mount Aconcagua, the tallest mountain in North & South America.  Undertaking the 23,000 foot uphill journey were Diana Zographos, Sameer Ali Ahmed, Akash Somashekhar, and Nikhil Balachandram.  Together they raised $14,212 for this project through AID Boston, which along with the amount approved by AID Chicago will fund the first year and part of the second year.

AID is also considering further support to the project through donations it has received.