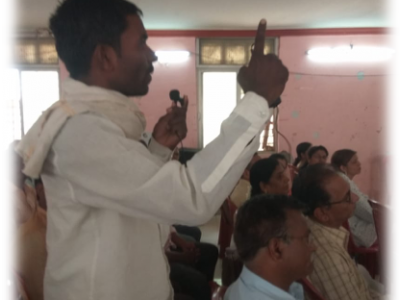 Parbhani district is among the more drought-prone and less developed districts of Maharashtra. Scarcity of water, employment, migration and farmer’s suicides are some of the major issues that plague this district. This story is of Zari village where, an old patient suffering from severe dehydration was brought to the Primary Health Centre (PHC). There he was told by the PHC staff that since his condition was severe, he would urgently have to be taken to the Parbhani District Hospital which is located nearly 25km away. In such emergency cases, it is actually the responsibility of the PHC staff to arrange for ambulance for the patient. But the staff had refused to make any such arrangement. The patient was poor and did not have any family or relatives to help him.

One of the activists from Youth group of Parbhani, associated with SATHI and working on promotion for Health Rights and building campaigns around it in the villages, happened to live in the same village. Realising the urgent need for support to the old man, the activist paid Rs. 800 out of his own pocket to arrange a private vehicle and took the patient to the District hospital.

As an activist, he has got an opportunity to raise the issue of non-availability of ambulance in the block Public Hearing (PH). The public hearing is a vibrant and powerful mass dialogue forum where people raise their experiences, discontent and issues faced from public health service providers. As the PH is mainly between people and health service providers, it is mandatory for health officials to remain present at the PH and give answers to the issues raised by the people. 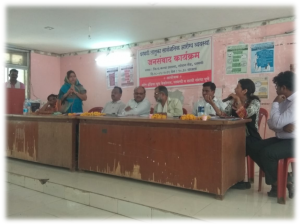 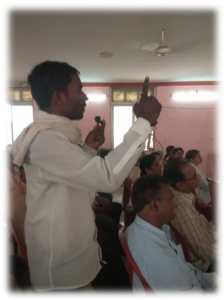 Health activists raise the issue of non-availability of ambulance in the block Public Hearing at Parbhani district.

Hence, at the block level PH, organized jointly by SATHI and local youth group as a part of Health Rights campaign, the health activist raised this issue saying that the PHC had not provided an ambulance. He also pointed out that had the patient had family, even they would have had to incur out-of-pocket expenses to take the old man to the hospital. Many times, due to poverty, the family would have had to arrange money from other sources which would put them in debt.

He also expressed that according to government guidelines, the patients are to be reimbursed for any out-of-pocket expenses made for the services that the government is supposed to have provided but did not. He claimed that rightfully he must be reimbursed for the expenses he had incurred. Because of the strong demand and pressure raised by the Health activist and support received from other community members, the block and district level health officials who were present in PH, the accepted their mistake and directed the PHC officials to reimburse the money to the activist through PHC RKS funds.

The issue of non-availability of ambulance leading to forced Out of Pocket Expenditure (OoPE) by patient echoed among community members from other villages in the PH. Many villagers had faced the same issue in the past. Hence, in order to address this, the elected representatives from District Council have given an ultimatum to Health officials to set up a proper and effective referral system for patients. To this, the health officials promised that they will issue orders to all medical officers for utilizing Rogi Kalyan Samiti (Health Management Committee constituted in each Health facility for ensuring welfare of patients) funds for addressing such referral related issues.

Thus, the empowered Health activists trained by SATHI are not only facilitating the local community Health Rights campaign but are also raising and advocating for resolving systemic and policy level issues that emerged from community-based accountability processes.