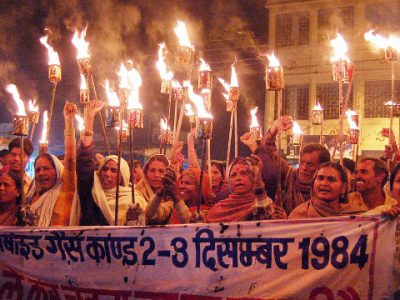 Unlike the people of Bhopal
Eric Garner was not choking on gas
From a Union Carbide pesticide plant.

Or could it?
Could somebody have stopped it? Fixed it? Closed it?
In the 1960s when Mellon reported on the toxicity of MIC gas?
In 1976 when the trade unions wrote about the pollution in the plant?
In 1981 when a worker died due to a valve malfunction?
In 1982 when workers agitated for safety?
In 1982, when HQ was warned about toxic leaks from the evaporation ponds?
In 1982 when a worker was burned by MIC?
In 1983 – 1984 when gas leaked again and again and again?
Before December 3rd 1984?

Four days later the CEO was arrested and charged.
But somebody stopped it, fixed it, closed it.
Four hours later he got away.

Thirty years later, the site still polluted, people still ill, water still toxic
No accountability, no day in court
The plant closed, the company sold, Dow shares high as ever.
Nobody to stop them, everyone to court them.

Special Zones, Corridors, Regions
With a wink and a nod from the law
Whose long arm wraps around
People like Eric Garner

Could anybody have stopped Officer Pantaleo?
In 1993, when the NYPD banned the chokehold?
In 2014, when witnesses saw him holding, and Garner choking?

Aspiring for justice.
Waiting to exhale.