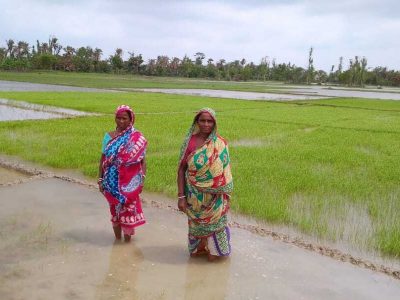 We at AID and our partner organizations are committed towards supporting the most vulnerable and under-served communities in India. Since cyclone Amphan struck and devastated livelihoods in Sundarban, we are aiming for long term rehabilitation at the last mile. Today we bring to a hopeful update that comes from Achintyanagar and Hatir Shur (elephant trunk) region of Patharpratima block in Sundarban.

Both areas were heavily affected by saline water which entered during the storm surge, which is detrimental to all forms of agriculture in this area. Our partner Chetana Sangha has been working in Hatir Shur (named thus because it is narrow sliver of land jutting out into the estuary), which is home to the most marginalized communities. Most of the inhabitants are landless, with just a small patch of homestead land at the edge of the island, and are often left out of government and humanitarian support. We are working with Chetana Sangha to select a large number of households from this region for seed support and nutrition garden program, which will support the nutritional needs of the people and help them in rebuilding of lives.

With sheer grit in the face of such adversities, the people in these areas have rejuvenated the land, and prepared rice seed beds in these villages. Chetana Sangha, with AID’s support, were able to procure the seeds for the farmers. With a successful monsoon in sight, the hope is that the farmers can revive their lives with the rice from this crop season and the produces from the nutritional gardens. We congratulate the intrepid heroes from these villages who are willing to take initiative to fight an adverse situation and create a better world for them and the rest of us. We hope you will also participate in that endeavour with your support.