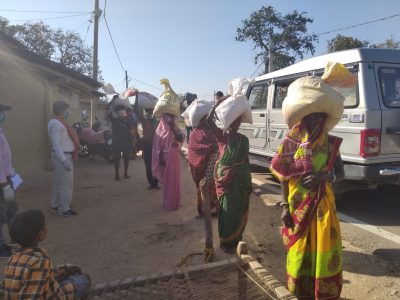 This update was from Ashok Kumar at the Savera foundation which works on watershed development in Koderma and Giridh districts of Jharkhand. They have been providing COVID relief to ~200 Adivasi families here since last year. Savera led an impactful response to COVID last year as well.

Update on regular activities: Savera was still able to complete 12-13 gully plugs in Koderma and the farm ponds in Giridih are almost complete. However their office has been closed. One staff member was affected by the virus and recovered. They were continuing to work as much as possible, until just before current restrictions came into force. For example, ration distribution in Giridih was done recently around the time of Holi. 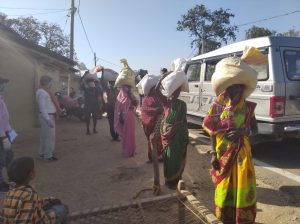 Health issues: There have been 300-400 new cases in one day in their working area. In the villages of Deopur, Kosmai, and Lacchmipur, each household has at least one person with high fever. Usually summer months lead to ill health due to weather changes, but COVID-19 has led to unusual chaos. More than 95% of the population is at risk this time around as compared to the first wave. Typhoid episodes are worsening the situation even further. In Savera’s work areas, masks, sanitizer, and ration are the most urgent basic needs. At the district level, there is a paucity of hospital beds and oxygen supply. At the village level, the major concern is simply food.

Economic issues: Mahua is in season still so people go picking and stocking them in their homes for drying and then selling later. A Government curfew is in place; the local body has applied restrictions on movement. However, the large population makes them difficult to implement. The authorities use force so that people abide by the rules.

Response to Coronavirus in India