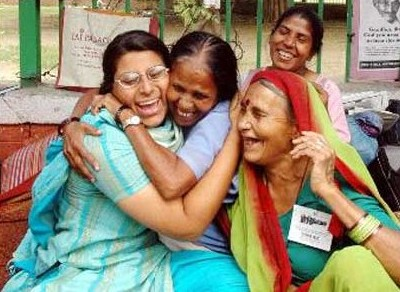 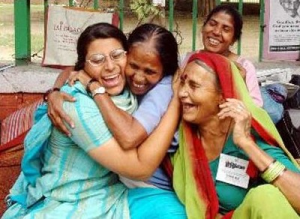 Rachna Dhingra is known for her work in Bhopal with survivors from the world’s worst industrial disaster – the gas leak from Union Carbide’s plant that has killed 20,000 people since 1984. A compassionate, determined and resourceful woman, Rachna moved to Bhopal from Ann Arbor in January 2003. Since then, she has immersed herself in getting the balance of compensation to survivors, initiating efforts for clean drinking water, generating employment, and mobilizing local and global communities. A key organizer for the campaign, her enthusiasm and energy is an inspiration to all.

Rachna joined AID Ann Arbor chapter in 1999, when she was an undergraduate studying business administration. Always interested in developmental issues, she found a perfect outlet in AID. Her no nonsense talk and her limitless energy became legendary. She developed an interest towards activist and women’s issues, keenly following the struggles in the Narmada valley and in Bhopal. In Ann Arbor, she and other AID volunteers set up the Bhopal Action Network to echo the concerns not only of the Bhopal survivors, but also those of survivors from chemical disasters all over the world. This network has been a continuous thorn in the side of Dow Chemical, located a short distance away from the university in Midland, Michigan. After graduation, Rachna joined Accenture where her first client, ironically, was Dow Chemical! After just a few months in this job, she followed her passion and quit to join the peoples’ struggle in Bhopal. She describes this passion herself – “I truly believe in the power of ordinary people because they simply are capable of doing extraordinary things. I see in Bhopal everyday and that is what keeps me going and inspired. As we say in Bhopal, Janta ki chala paltnaya Hill lai lai Jagjoor duniya!”