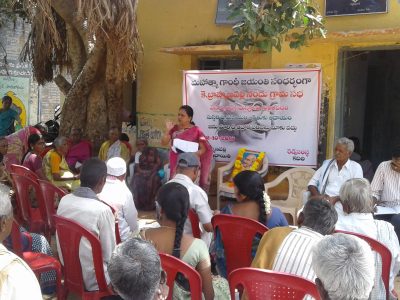 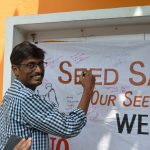 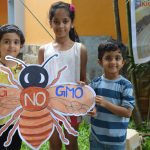 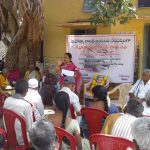 Hyderabad, October 2nd 2016: On Gandhi Jayanti, citizens from various walks of life spoke out for Indian Farmers’ Seed Sovereignty, for Safe and Natural Food, and against GM Mustard. As part of the nationwide “Sarson Satyagraha” mobilization, awareness events were organized in various parts of Telangana and A.P. including Seed Satyagraha event in Hyderabad by Rythu Swarajya Vedika along with likeminded organizations. Resolutions opposing GM Mustard and asserting farmers’ rights were adopted in many Gram Sabhas organized specially on Gandhi Jayanti on farmers’ issues.

The Seed Satyagraha in Hyderabad featured an exhibition of native seeds, poster exhibition on GM Mustard, organic food stalls, children standing in solidarity with farmers, and public signatures on wall banner asserting “We Say No to GM Mustard”. More than a hundred citizens from various walks of life participated, including television artiste Jhansi, agricultural scientist G.V.Ramanjaneyulu and well-known social activists Dr.Rukmini Rao, K.Sajaya, Usha Thuraga, Ashalatha and Usha Seethalakshmi. The consumers expressed serious concern that mustard is used every day in their cooking and “avakaya” pickle made with mustard is the favorite food of Telugu people, and declared that they do not approve of their food system being contaminated by Genetically Modified crops.

Participants expressed serious reservations with the undemocratic and unscientific approach of the Central government in pushing the approval of GM Mustard. Despite orders by CIC and Supreme Court, the Environment Ministry has refused to publish the biosafety dossier on its website. It has only put up a summary report of its own sub-committee for public comment, with a strict deadline which expires on October 5th. Though scientists, senior retired Supreme Court judges, most respected retired bureaucrats, and farmer leaders have asked for more time and independent scrutiny, the Government of India declared two days ago that it will not extend the deadline or upload the biosafety information online.

The participants raised big questions on why science is being compromised and why lies are forming the basis of this promotion of GM mustard by the Government. Evidence has already been presented about its hasty processes, its U-turns, its conflict of interest, and importantly, its lack of all areas of expertise in being able to certify the safety of GM mustard. The consumers

The Kerala government took a decision to oppose GM mustard approval and participated in the Kadugu Sathyagraham observed all over the state today. Other state governments including Bihar are in the process of registering their opposition.

“We have now understood well about the farcical and sham processes of consultation that GEAC is engaging in, in a biased and selective fashion. The sub-committee’s last meeting was in April 2016, and no more meetings even though we have been invited to present in July 2016 wherein we gave a lot of evidence that any scientist with integrity would have been concerned about”, said members of Rythu Swarajya Vedika. “Now we have the beekeepers and honey industry pointing out that they have valid concerns about their livelihoods and enterprises. But the regulators and the government are turning a deaf ear to them. So, it is a case of ignoring science, commerce, federal politics and citizens’ interests in this mindless push for a junk product. What is worse is that the government ignores its own party members and affiliated groups in its undemocratic ways”.

Sarson Satyagraha organisers called upon all independent scientists from various concerned areas of expertise to speak out now, to ensure that regulation is rigorous, independent and transparent. They also called upon state governments to assert their constitutional authority over Agriculture and Health and write to the Centre before it is too late. They called upon citizens to assert their right to safe food and environment, and right to informed choices, and ensure that governments are accountable towards citizens.

Meanwhile, a fresh application has been filed in the Supreme Court of India, showcasing the fraudulent and deceptive R&D and testing of GM mustard, praying for a prohibition on open air field trials and commercial release of herbicide tolerant crop in India including GM mustard, due to the variety of serious risks that they pose, and seeking a moratorium on commercial release of any GM crop.