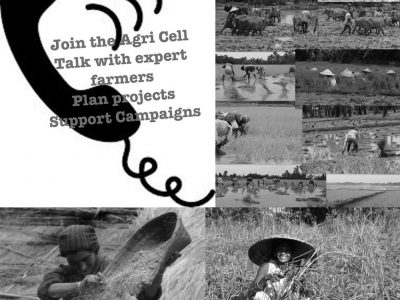 Priti started with going over broad objectives of the WINS-MAKAAM project for women farmers:

There will be a series workshops with women farmers and another set of workshops with duty bearers.  The project will also initiate a gender desk in the district.

The WINS-MAKAAM project’s goal is to provide socio-economic-political space for women and to develop them in all aspects.

Regarding ecological farming, there is some talk and programs on sustainable initiatives from the AP (Andhra Pradesh) government.

A third of women farmers are currently practicing ecological farming.  It will take time to transition the rest.

Kiran: The AP government has in the last couple of years taken many steps to help farmers.  Part of these efforts are in organic agriculture, and part in revival of the millet program in 7-8 districts.  There are also special programs on rainfed areas (farm lands that mainly get their water from rain rather than irrigation).

There are 5 districts where farmer suicides are more problematic.  The government has taken some steps to address this and other problems, with a push from advocacy from us and our partners.  Positive steps from government are also due to some good officers, like Vijay Kumar, AP Agriculture Secretary (until recently).  Vijay Kumar did good work with organic farming and women’s self-help groups.

The MAKAAM network was formed in the last 1.5 to 2 years.  There are about 10 NGO’s involved in the MAKAAM network.  Their first conference in AP in the Guntur District was in collaboration with the AP government.  Due to the presence of Vijay Kumar and women’s self-help groups, this was hosted in an agricultural university.  (Sudheer: Not completely sure if I got this right.)  Overall, there is already a responsiveness from government.
Vijay Kumar retired September 30, but continues as an adviser.  The new Secretary of Agriculture is also favorably disposed to these programs.

There is a favorable agenda in government for ecological agriculture and also for women farmers, but they have their own clusters.  We need to see if we can create a collaboration between women farmers groups and organic clusters in the government.  We can build on this intersection.Organic and chemical groups/advocates coexist in government.  Organic agriculture is being promoted in about 120-150 clusters of about 5 villages each.  This was just launched this June/July.

Kiran’s Overview of His Work in Andhra Pradesh and Telangana

Kiran: We work with Rajya Swaraj Vedika (?), a coalition of farmers’ and farming-related groups.  Some of the work is supported in the form of individual projects (?).  There are various groups like RDSS, etc., many abbreviations, and can be confusing. J

But it’s best to look at this whole thing (RSV) as a program, not as individual projects.

We just were sent (?) another proposal from Rilipu (?), from a person who is the secretary of RSV.

The partner REDS has done very good work with women farmers.  They can be a good resource to help with the WINS-MAKAAM project.

We’ve been working with farmer suicide families (headed by women).  They are struggling with farming.  They don’t know where their husbands took loans, what their net income was, where they can get the best price for their crops, where their land records are, etc.The situation is better where there are solidarity groups of women farmers, as were started in 2013 in the Anantapur District (?).  There are now about 400 women part of women farmer solidarity groups there.  We’ve now formed 3 women cooperatives.  Meera Raghavendra (Secretary? Of WINS and our contact with the WINS-MAKAAM project whom we talked with on the 11/23/16 Agri Cell call) knows about these 3 women’s cooperatives.  Meeraji was at a meeting where they partly talked about women going into sex work due to the agrarian crisis.

It would be good for the Chittoor District people (with the WINS-MAKAAM project?) to visit women’s coops in the Anantapur District to get real engagement and ideas for their cooperatives.

The most important part AID can play is to support human resources.  We identify such people, bring them into our network, and make a coordinated effort with them.

There are now 3-4 very good programs conducted by the AP government due to our and other activists’ grassroots work, e.g., encouraging organic agriculture and millet production.

Our partners are involved in scaling up these efforts.  We’ll go through the report I sent via e-mail on our next call (in two weeks).

There are 3-4 AID Chapters involved in supporting these projects, including Seattle, Morgantown, Duke and College Park (now DC I believe).

Vidya: It’s good to translate posts about this work on Facebook (FB) from Telugu.

Priti: Young (?) AIDers in Seattle are helping with this translation work.

Kiran: There was an FB post in Telugu from a visit from yesterday.  It would be good to translate this.  It’s one to two paragraphs.

Rahitya Swaraj Vedika (RSV) has a FB page (maintained by Navin, Kundal, Dr. Ram Manjanelu and maybe others).  Kundal has good pictures with his posts.

Priti: Can we use Google translate?

Kiran: Yes, but it should be reviewed by someone who knows Telugu to check it, correct grammatical mistakes, etc.

Kiran: The effects of demonetisation have been pretty bad on farmers.  This policy came at the wrong time for farmers.  November is a peak period for harvesting and selling the khari crop and sowing the lavi crop.  A lot of vegetable farmers run on cash.  The onion market closed for a couple of weeks.  Farmers had to take their onions to market 500 kilometers away.

State governments are trying mitigation efforts.  Demonetisation is like a natural disaster.  People don’t curse a cyclone, but see what they can do about the effects.  People aren’t currently “opposing” this decision, but are going through the ensuing hardship.  If it (demonetization or its related hardship) continues for another week or so, they will become angry.

Priti: There is an insensitivity to what is happening to rural economies.  I saw a BBC report on the barter economy in rural areas.  It’s a short 2-minute video.Viji: Swati from Boston shared this video on FB.

Kiran: There have been other reports also, shared on e-mail groups, etc.

Priti: The focus has been on ATM’s and the urban educated class….

Regarding Delhi smog, maybe agriculture could be part of the solution, using agro-ecological practices.(Note from Sudheer: Part of the Delhi smog problem is from farms burning crop residues rather than composting them.)

Kiran: There are certainly groups in Punjab working on this, for example, Kheti Viraasat Mission there [which AID supports].  They have put out information on why burning crop residues is bad, and how there are better ways of using that biomass.  But it’s not such a concerted effort.  To really have an impact, it has to come from the government.

Priti: We should try to work it into the national (farming) conversation.

Kiran: We will talk to groups in Haryana especially that we work with that can do this.

Sudheer: It would be good to have a collection of interviews and talks of Revathi.Viji: Vishnu (from the Tamil Sangam of New York City?) interviewed Revathi.

Vidya: There is a three hour audio recording [of Revathi’s interview with the Tamil magazine Thendral]. I’ll send it to [Sudheer].