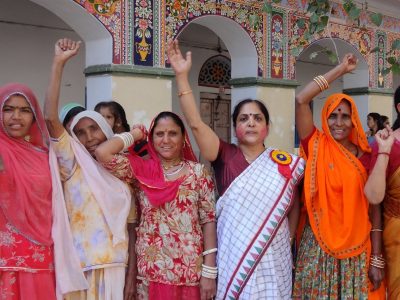 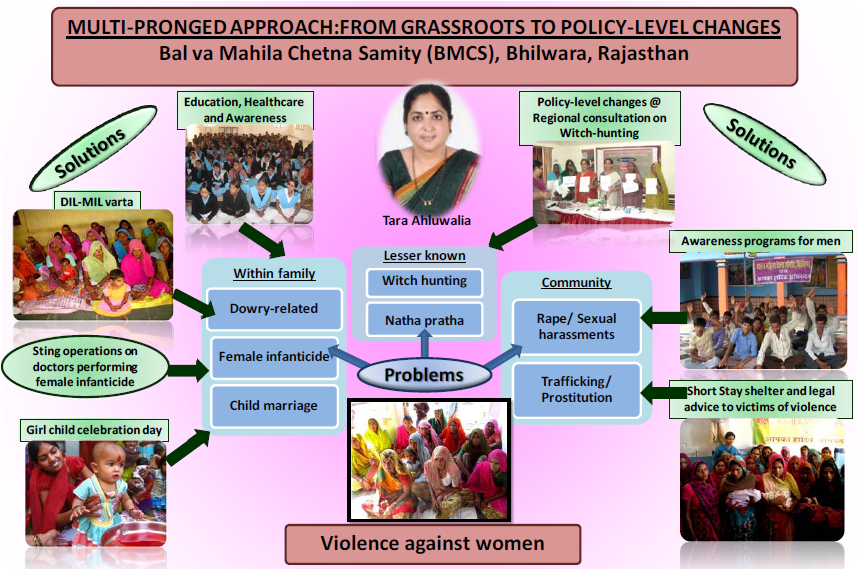 Summary:
Violence against women is the norm in the male-dominated society of Rajasthan, esp. in Bhilwara district. Taraji with an educational background in social work has dedicated every bit of her life for the past 3 decades to protect and provide support to female survivors of violence in Bhilwara. Taraji employs a multi-pronged approach to address the multi-faceted problem as represented below.

Issues and Modes of operation:
Within the family: 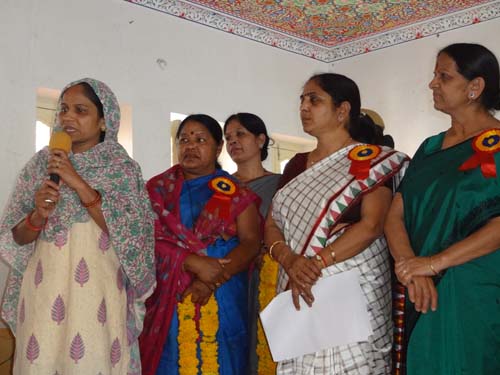 There is dowry-related domestic violence, female feticide and infanticide and child marriage. It is a society where people mourn on the birth of a girl child. Taraji has tried to create a change in people’s perspectives and culture by organizing “Girl Child Celebration Day” in these villages where she invites all families and women who have recently had a girl child. She has also successfully performed sting operations on doctors who perform female feticide and have got them convicted.

She organizes “Daughter-in-law (DIL) and Mother-in-law (MIL) varta” to encourage open conversations and discussions between them, since such conversations hardly happen in these homes. This breaks the ice and eases out dowry-related issues to an extent. She also organizes awareness generation programs for men to realize the importance of women and to respect them. All these help in changing the deep rooted gender discrimination in the society and to address related issues. She works with schools to educate girls on healthcare and has got them bicycles from government for easy travel to schools.

Within the community:
There is rape, sexual-harassment, sex-trafficking and prostitution are very common in this region. She has a short-stay shelter at her home for female victims of violence, where these women would have a safe place and opportunity to think about rehabilitation. She also provides legal advice to these women. She is also in-charge of Mahila Salah Evam Suraksha Kendra (MSSK), which is a State Government center for counseling and legal advice for women. Hence, more and more women are coming under the care of Taraji. She is not compensated for her work with MSSK. There are two other counselors who work in MSSK who are being compensated by the government.

Some of the lesser known problems women in this community face are witch hunting and Natha pratha (husband marrying another women while abandoning his wife). Witch hunting targets are usually lonely or elderly women who possess land or other wealth. The women is branded as witch by the community and is tortured in various ways, such as asked to walk naked around the village, forcing chili powder in private parts and beaten or burnt to near death! This is to make her go away from the village so interested people can take over her land. Police also does not take a strong action in such cases, since there are no laws against witch-hunting so far. Taraji has worked with law-makers and a stronger law against witch hunting is going to be passed very soon, as of Sep 2013. Taraji provides shelter to witch hunting victims, then travels to the victim’s community, has a public talk with Jati Panchayat, and usually gets the convicted to confess in public and the women is usually accepted back into the community.

Challenges:
Although her continued efforts have led to some changes in the mentality of the society and has created a few stronger laws, there is still a long way to go to completely resolve all the issues women face to date in this region. In addition, she is the main person working on all these issues with support from many others. Hence, leadership of this work would suffer after Taraji and finding someone who can take this up after Taraji has been a challenge. Organizing Sangarshshil Mahila Samman brings in a sense of solidarity among the survivors and helps them organize self-help groups. Eventually, it also would help her to identify women who might take up her work after her. But, it is difficult to replace someone who has gained so much influence and contacts over a period of 30 years.