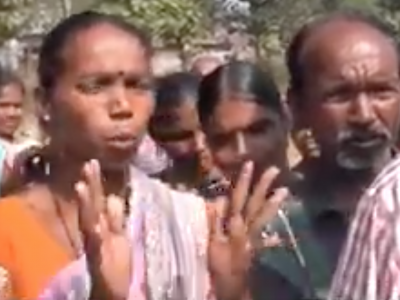 After the incidents of January 6th, 2017 including entry of a large police team, forcible harvest of paddy crop and arrest of Adivasi villagers in Chinna Jaggampeta village, Nathavaram Mandal, Visakhapatnam district, a Fact-Finding Committee was constituted on behalf of civil society groups. The members of the Committee are Ramakrishnam Raju, national convener of National Alliance of People’s Movements (NAPM), Kirankumar Vissa, B.Kondal and Naveen Ramisetti on behalf of Rythu Swarajya Vedika, and Y. Bhaskar Rao from Dalit Samanvaya Committee. The Committee made a fact-finding visit on January 17, 2017 to Chinna Jaggampeta and Nathavaram.

As Gandhiji said, “A nation’s greatness is measured by how it treats its weakest members.” The committee is conscious that how the state agencies deal with adivasis has larger implications for the democratic functioning of society, going beyond Chinna Jaggampeta village.

The fact-finding committee visited Chinna Jaggampeta village and inspected the paddy field and the part of harvested crop which was dumped in the field. We interacted with the Adivasi villagers including women and children, and probed them about the happenings of January 6th as well as the past developments and background situation. We also examined the relevant documents including court petitions, letters, orders and land documents related to the case.

Afterwards, the team visited the Nathavaram Mandal Revenue Office (Tahsildar office). We first saw the harvested paddy crop which was dumped in front of the Mandal Education Office which was next to the M.R.O. office. When the Thasildar  arrived, the team met him and had a detailed discussion for about 45 minutes about January 6th incident and previous developments. Later, the team visited the office of the Sub-Collector of Narsipatnam who is also the Revenue Divisional Officer (R.D.O.). However, the R.D.O. was not available at the office though we waited for 2 hours.

Some members of the media accompanied the team during the fact-finding visit.

(1)  The land is being cultivated by adivasis and is in their possession: The adivasis clearly stated that their families have been cultivating the 22-acre land from the previous generations, i.e., for several decades. This includes about 12 acres of paddy land. They stated that the local landlord Mr. Ankamreddy Nookaraju has been claiming the land using a false patta.

They also informed us that Mr. Ayyanna Patrudu, Minister of Panchayat Raj and local MLA, is from neighboring village of Edurupalli, and before the 2014 elections, he visited Chinna Jaggampeta and promised in a public meeting that the adivasis will be issued pattas to the 22 acres of land, asserting that he had been seeing them since his childhood cultivating this land.

When we enquired with the Thasildar about the possession of land, he told us clearly that the adivasis have been cultivating the crops in the land and they are in possession for many years. When the committee asked him to state this in writing to the district administration, he said that he had mentioned this in an earlier letter to R.D.O., and is ready to state the position if he is asked  by the Joint Collector regarding the pass books  dispute.

Even though it is clear that the adivasis are in possession of the land and cultivating it, the R.D.O. stated in his order dated 21/12/2016  that he is unable to determine who is in possession and hence the crop should be confiscated under Section 146. This has resulted in severe injustice to the adivasis resulting in the loss of their cultivated crop.

About 50 adivasi families of Chinna Jaggampeta are jointly cultivating the land in a collective arrangement where the  crop is equally shared by all the families. They informed us that they do not have any other land for cultivation, which was corroborated by the Thasildar. The 12 acres of paddy was expected to yield about 360 bags of paddy rice, which is the main source of food security for these families. Now they have lost it, impacting their survival for the next one year.

When we observed the harvested crop, we found that it was not fully ready for harvesting. The grain was not completely filled, and the good grain was only about 50%. Though the adivasis informed the Thasildar and police on January 6th that the fields were not yet ready for harvest, the officials went ahead with cutting it. Moreover, the harvested crop was not packed in a proper manner to enable threshing of the grain – instead it was dumped in heaps near the M.R.O. office. The M.R.O. told us that if the case is settled in favour of adivasis, the crop will be handed over to them. But it is clear to us that already about half the crop are lost due to premature harvesting and if there is further delay in handing over the crop to adivasis, it will be spoilt.

(4)  Heavy-handed use of police force:

When the adivasis told the officials that they should be allowed to harvest their own crop when it was ready, a heavy police force came to the village. They arrested about 40 villagers and took them away to K.D.Peta police station which is 40 km away. This included about 20 women, some of whom were pregnant or carrying infant children. The women reported that even a two-year old child was dragged by the neck, and two youth who were taking photos with their mobile phones were beaten.

The adivasis filed a case in the High Court against the Section 146 order issued by R.D.O., and the case was being heard on January 6th. Despite this (or maybe because of this?), the officials started the harvesting on the same morning. At 4 p.m., the High Court issued an order to maintain status quo. The same was informed to the Thasildar  by phone immediately by the High Court advocate. Despite this, the officials continued the harvesting until 1 a.m. using diesel generator set in the night, as per the villagers. When we questioned the Thasildar., he admitted that the advocate told him about the High Court order at 4.30 p.m. but did not give a satisfactory answer about why they continued harvesting.

(6)  Complaint of false patta (title) against the landlord:

There is an underlying land dispute about which a civil case is pending. Mr. Ankamreddy Nookaraju, a local landlord, holds a patta to this land though it is being cultivated by the adivasis. The adivasis have filed a petition that this patta has been issued based on wrong documentation, and this is pending in the court of the Joint Collector for more than 2 years. The adivasis want a quick adjudication on this issue.

(7)  How the January 6th operation was financed:

We enquired with the Thasildar  about how the expenditure for the January 6th operation was handled. Did the government sanction funds for it? How were the payments made for 70 labourers brought from other villagers, the tractors, food and alcohol given to the labourers, diesel generator set and lights which were used to continue harvesting at night? The Thasildar told us that since funds were not yet sanctioned by the government, payments have not been made for all these. There was no satisfactory answer about how they worked without payment. The local villagers claim that the whole operation was financed by Mr. Ankamreddy Nookaraju who is claiming to be title holder of the land.

Demands of the Adivasis of Chinna Jaggampeta

When the committee enquired with the adivasis of Chinna Jaggampeta about what they would like the government to do, these were the main demands they put forward.

(1)  The wrongfully harvested crop should be immediately handed over to the adivasis, and they should be compensated for the loss of crop.

(2)  The Joint Collector should immediately complete enquiry into the pending case of false patta. The patta held by the landlord should be canceled.

(3)  Action should be taken against the R.D.O. and other officials who perpetrated injustice to the adivasis.

As the fact-finding committee, we concluded that serious injustice was committed against the Adivasi families of Chinna Jaggampeta by the revenue and police officials. We hope that the district administration will take immediate action to restore justice, and that the Courts will protect the rights of the adivasis.

(2)  MRO confirming that the adivasis are in possession: https://youtu.be/w2GtWcrVPM4

(4)  Villagers explaining the course of events: