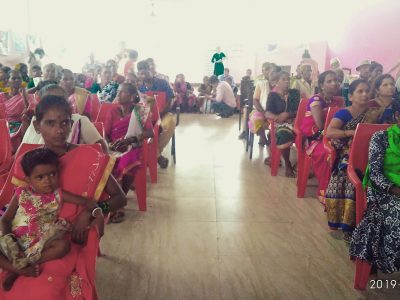 “My Daughter in law is pregnant….it is her first time. Here are all her papers… This money that you are talking about…She hasn’t received any such money till now… I can’t talk into the mike…

You speak on my behalf please” said a tiny old woman from the Katkari tribal community to me, as I stood on the stage hosting a Public dialogue on Health in the village of Pen, in Raigad district of Maharashtra. There were more than a 100 people crammed into the local library hall where we had organized the hearing. It was 6th June 2019, and the skies were grey with monsoon clouds. People had come from around 40 Padas (hamlets) from the surrounding hills and we wanted to finish the meeting by early afternoon so they could go back to their homes before dark. 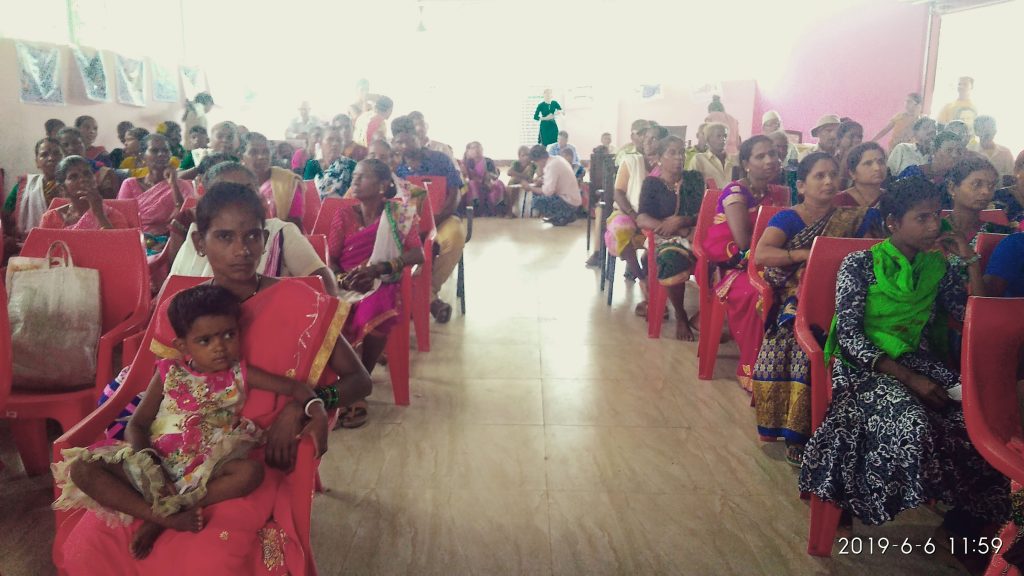 We had pulled off a coup as the MLA for that region had accepted our invitation and was present for the meeting. A retired judge and retired senior government officials were also invited to hear the grievances of the public. Along with them was the Block Health officer, medical officers from Primary Health Centres (PHCs) and other officials from the Department of Health for Raigad district. They were all present this afternoon, though they were reluctant in the beginning to even acknowledge us and had made many excuses in the past weeks to avoid attending this meeting. This three- hour public dialogue on health was the culminative result of six months of effort by SATHI and Ankur Trust.

Tribal communities from Raigad district suffer from high maternal and child mortality, which is why we decided to focus on this region. Funded by AID, SATHI had initiated the process in January 2019 by training the staff of Ankur Trust, our local partner organization, in the process of conducting social audits of government schemes and public health institutions along with capacity building in health rights and issues. We helped them to create tools for data collection, with the help of which they then conducted a survey on access to public health services in forty Padas (hamlets) and four PHCs. It was the findings of this survey that were being presented in the public hearing in June. 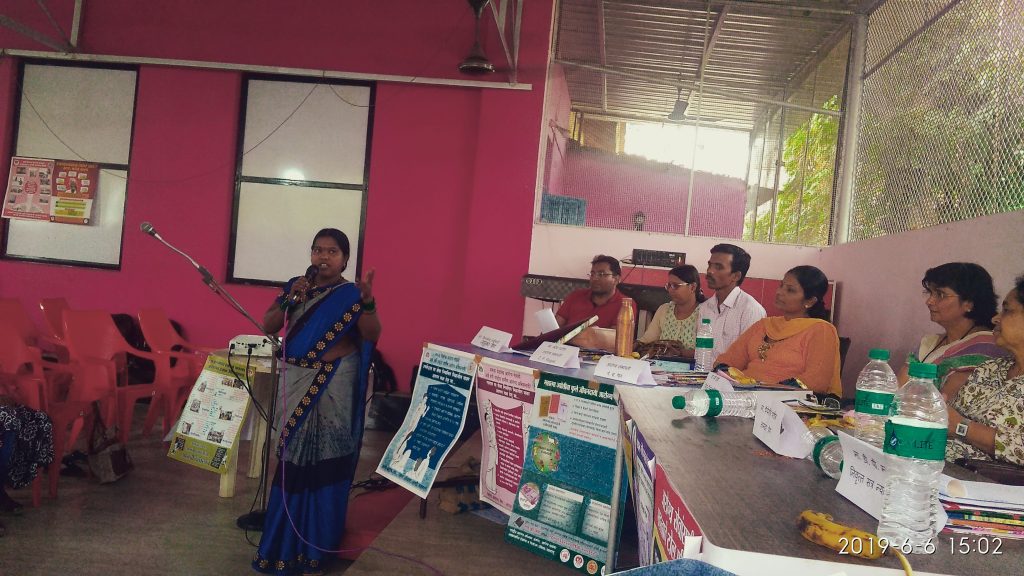 Woman speaks at the jansamvad in Raigad District.

The survey focused on the implementation of certain flagship government schemes for Maternal and Child health amongst tribal communities in Raigad district. The central government sponsored Pradhan Mantri Matru Vandana Yojana (PMMVY) is a maternity benefit program, where a cash incentive of Rs 5000 is provided directly to the bank/post office account of pregnant women and lactating mothers for the first live birth, thus compensating them partially for wage loss during childbirth and childcare and to enable good nutrition and feeding practices. The State government sponsored Matrutva Anudan Yojana also offers pregnant and nursing women cash incentives on delivery in government hospitals and grants for medicine and food.

The schemes have all grand names and ambitious targets but the survey showed that their implementation leaves a lot to be desired. Women in tribal communities in Raigad live in remote hamlets in the hills where there is no public transport. If they wish to register for the PMMVY scheme, it is first necessary for them to open an account in a bank or post office which have offices only in block towns. Subsisting on meagre incomes and left with no money to save, most tribal community members never needed to open a bank account.

We heard from pregnant women who needed an entire day to reach the Taluka (block) town from their villages to open a bank account and had to go back dejected, because they didn’t have all the relevant documents or the names didn’t match across all the different documents. If a woman doesn’t update her name on her Aadhar card after her marriage, she is not eligible for the PMMVY scheme as documents have conflicting details.
Documents are still prepared by hand in many parts of India or by officials who struggle with computers and the English language. I live in a big city like Pune and my Voter ID card is full of mistakes. My birthdate is entered wrongly, my father name is entered as my husband even though I am unmarried. I have always managed to vote with the same card, even though it doesn’t match with any other ID I have.

Simply put, banks refused to open bank accounts for women whose Aadhar cards were not updated after they were married. But there are no facilities to update Aadhar cards in the remote villages where these women live and no one to guide them either. There were many such women in Pen taluka who could not access their entitlements in the PMMVY scheme on the basis on this technicality. We have heard the same story from other places in Maharashtra as well.

On one side, the government shares impressive statistics about the success of this program and its commitment to maternal and child health. On the other side, many women from the most marginalised sections of society are denied access to the schemes they need desperately, due to red tapism and official apathy to solve these bottlenecks.

In the public dialogue, we interviewed seventeen such women who were first time mothers and didn’t receive the care and resources promised to them through various schemes. Eight out of Seventeen women were not taken for sonography during their pregnancy or provided transport to a hospital for their delivery. Nine out of seventeen women did not receive Rs 5000 that they were entitled to in the PMMVY scheme.

On further enquiry, it turned out that the health department had not tried at all to solve this problem despite being aware of it. They simply threw their hands up, saying they couldn’t transfer the money if the banks refused to open the account.

The retired judge on the panel pointed out that the Supreme Court of India had decreed that it is not mandatory to insist on Aadhar card for opening of bank accounts and to qualify for government schemes. And if this was indeed the case, then it was not just contempt of court but a great injustice when the very people who are supposed to benefit the most such by such schemes are denied access to them on the flimsiest of grounds.

Many activists have demanded that the government should simply commit to provide quality and affordable healthcare for all instead of introducing various schemes that lack effective implementation.

However, there is a marked lack of people centred planning, budgetary resources, political will power and social accountability to make healthcare for all a reality. In such circumstances, what helps is the presence of forums like Public Health Dialogues, where the common man can freely ask questions to their elected representatives and authorities regarding their health rights and demand explanations for denial of services and entitlements.

In this public health dialogue, the panellists exhorted health officials to commit to helping eligible women to access their entitlements. After the hearing, Ankur trust staff registered all the cases on an online grievance redressal portal and followed up with concerned health officials.

Subsequently, ASHA workers were mobilised to facilitation the updating of Aadhar cards of all these women and help them to open a bank account.

Till October 2019, seven out of nine women have received Rs 5000 in their bank accounts.
Tribal community members have now realised that they can hold the concerned authorities accountable for effective implementation of government schemes through participatory forums such as public dialogues and social audit processes.