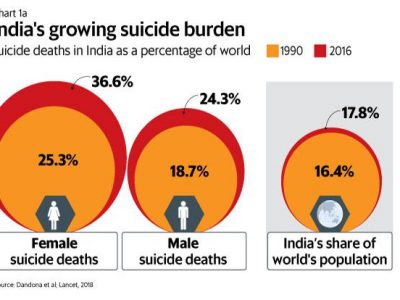 20
Dec
A recent study published in The Lancet found staggering rates of suicide in India – significantly higher than 25 years ago, and currently among the world’s highest rate of suicide among women.  The study reports 230,314 deaths by suicide in India in 2016 alone, which comes to more than 25 per hour.  Of these, 10 are women and 15 are men.
General awareness of the crisis of farmers’ suicides has led the public to demand actions to address the causes of agrarian distress as well as similar dynamics in other sectors including weaving.  There is an urgent need to address the underlying causes that lead so many men and women to resort to the desperate step of taking their own lives.  The alarmingly high rate of suicide among women demands urgent attention, investigation and action. 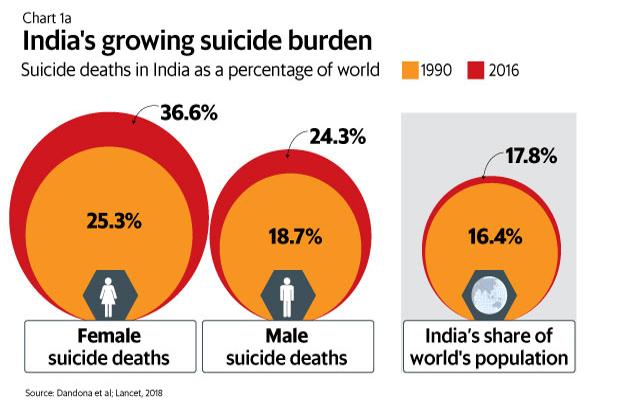 Suicide deaths in India as a percentage of world. Source: LiveMint based on data from The Lancet.

In the Discussion portion of the paper, the authors note that “there is a need to better understand the linkages between mental health and sexual and reproductive health, and rights for adolescent girls in India that constrain their aspirations and opportunities leading to higher suicide deaths.”

They also call attention to

the particular need to better understand the determinants of suicides among women in India. Globally and in India, differences in socially acceptable methods of dealing with stress and conflict for women and men, availability of and the preference for different means of suicide, differences in alcohol consumption patterns, domestic violence, poverty, and differences in care-seeking rates for mental disorders between women and men have been cited for gender differentials in SDR.  Married women account for the highest proportion of suicide deaths among women in India.  Marriage is known to be less protective against suicide for women because of arranged and early marriage, young motherhood, low social status, domestic violence, and economic dependence.  The trends in SDR in women in this study suggest the need to further assess the complex relationships between gender and suicidal behaviour to facilitate women-specific suicide prevention strategies.  The Protection of Women from Domestic Violence Act has been in place in India since 2005, and it would be prudent to understand the effect it has had on suicide prevention among married women.

AID works with a number of organizations that promote women’s mental and reproductive health, rights for adolescent girls and suppose women who are dealing with domestic violence and other forms of oppression at the household level.
As noted by the Scientific American:

Women in India are committing suicide at an alarming rate. Research published in the October issue of the Lancet Public Health reveals that in 2016 they accounted for more than 36 percent of female suicide deaths globally, despite making up less than 18 percent of the world’s female population. Suicide is the leading cause of death among Indian women ages 15 to 29, responsible for about 26 to 33 deaths per 100,000 women in that range. According to the Global Health Data Exchange, a database that tracks worldwide health trends and demographics, India has the highest suicide rate among young and middle-aged women for countries with similar sociodemographics.