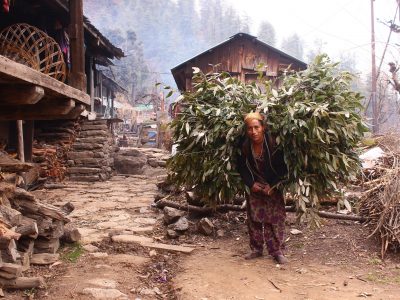 In Kinnaur, forests are the fodder of a rural mountain economy and women make this economy work. PC: Sumit Mahar

A shepherd preparing his meal in Kangra. PC: Sumit Mahar

Natural water spring is a key source of drinking water and irrigation in the Himalayas. PC: Sumit Mahar

Despite the fact that the Himalayas are referred to as the world’s largest storehouse of water or water towers, the water crisis looms in the Himalayas just as it does in the rest of the country. Water is held not just in the form of snow-capped mountains and glaciers, but also in the underground aquifers recharged by the diverse forests of the region. These stored waters are discharged in the form of surface streams, rivers, and springs, forming the lifeline of ecology, society, and economy of the mountains. While Himalayan rivers have received some attention, the springs and their importance is insufficiently acknowledged. Springs (referring to the ground water discharges in the mountains, locally called ‘chashma’ or ‘dhara’) have been a subject of discussion over the last 2 years, given the emerging water scarcities in the Himalayan region. The Niti Ayog commissioned a study to understand the causes of drying up of Himalayan springs and how these could be revived. The study highlights that “nearly half of the perennial springs have already dried up or have become seasonal” in the Himalayan belt. While it recognizes larger changes like global warming as a factor affecting ground water discharge, it also observes that anthropogenic factors and construction activities like hydropower projects have played a role in exacerbating the problem.

In areas where villages are located higher up the mountains, the key source of water for domestic uses as well as irrigation are these springs. In Kinnaur, or the upper reaches of Chamba, the farmers would not have been able to practice a profitable occupation like horticulture (growing apples) had these springs not existed. The disturbance of underground springs and water aquifers reported mostly by communities in hydro project affected area is considered to be a hydrogeological phenomenon across the mountain regions. But as recorded by the Dr. Ravi Chopra Committee report entitled “Assessment of Environmental Degradation and Impact of Hydroelectric Projects During the June 2013 Disaster in Uttarakhand”, technical experts attribute the drying up of water sources to several other factors. As a result of this the committee had recommended that a scientific study of the same needs to be conducted.

Degradation of forests due to diversion for large projects, forest fires and the changing forest regime have also impacted springs and rivers alike. In Himachal Pradesh, 7 rivers have been identified as critically polluted by the Central Pollution Control Board. The key reasons for this crisis are rapid urbanization and unregulated tourism with no policy on solid waste management. As a collective we have taken up some initiatives in the form of campaigns, advocacy and discourse building in the state:

1. Demanding a moratorium on large hydropower projects and the campaign for free flowing rivers
2. Initiating a dialogue on adverse impacts of commercial tourism and understanding what ecologically responsible community based tourism is
3. Implementation of the forest rights act 2006 for community control of forest resources
4. Intervening on industrial pollution and the issue of solid waste
5. Film Screening | Ho Gayi Hai Pir Parvat Si (The Mountains Agonized)