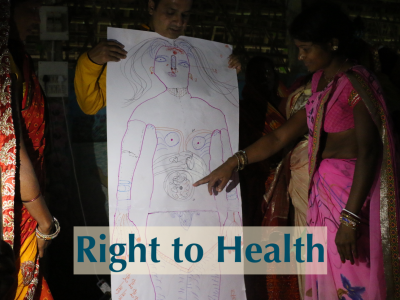 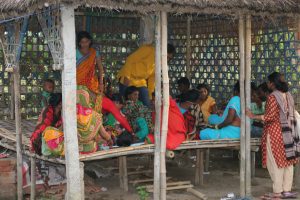 Khiyali KP (age 15) enjoys math, drama, writing, reading, playing with her friends, and keeping the government on its toes. She volunteers for AID, Harford County Climate Action, and Youth Circles.   She visited Araria in July 2018…

So a week or so ago, I got to go to Araria, Bihar for a health workshop. The workshop was held by Jan Jagran Shakti Sangatan with SATHI.  The location was “the Centre,” the headquarters of JJSS, with plenty of places for sleeping, meeting, and cooking. They even had a watermelon plant and several okra plants! There was also one raised, covered platform made almost entirely of bamboo, where we met in a big circle as soon as we arrived the night before the workshop. We all introduced ourselves while carefully placing our weight on the sturdiest parts of the woven platform (it was a fascinating weight distribution experiment) and then managed to, between the 20 or so people and one notebook, remember and sing “Tod Tod ke Bandhanon ko.”

The next day, the workshop commenced! About 50 people — mainly women — arrived from villages all around. I later found out that the local language was Thēthi, and some of the people were getting some of the phrases translated from Hindi.  So was I, though into Telugu / English.  Shaku didi, Nitin bhai, and Bhau bhai from SATHI conducted a series of sessions over 3 days.  SATHI stands for Support for Advocacy and Training to Health Initiatives and is an organization in Pune that works on improving public health.  I later found out that some of the women, such as the group from Vaishali district had to travel overnight, so far away did they live.

I could not attend the first day. Ironically, it was due to bad health, but at least I got to practice lots of revolution songs while I was resting! However, I heard that the people who did go to the workshop that day had made groups and drawn human body diagrams. They did this by having one person lie down on a sheet of paper, tracing said person onto the paper, and then drawing organs on the resulting outline. 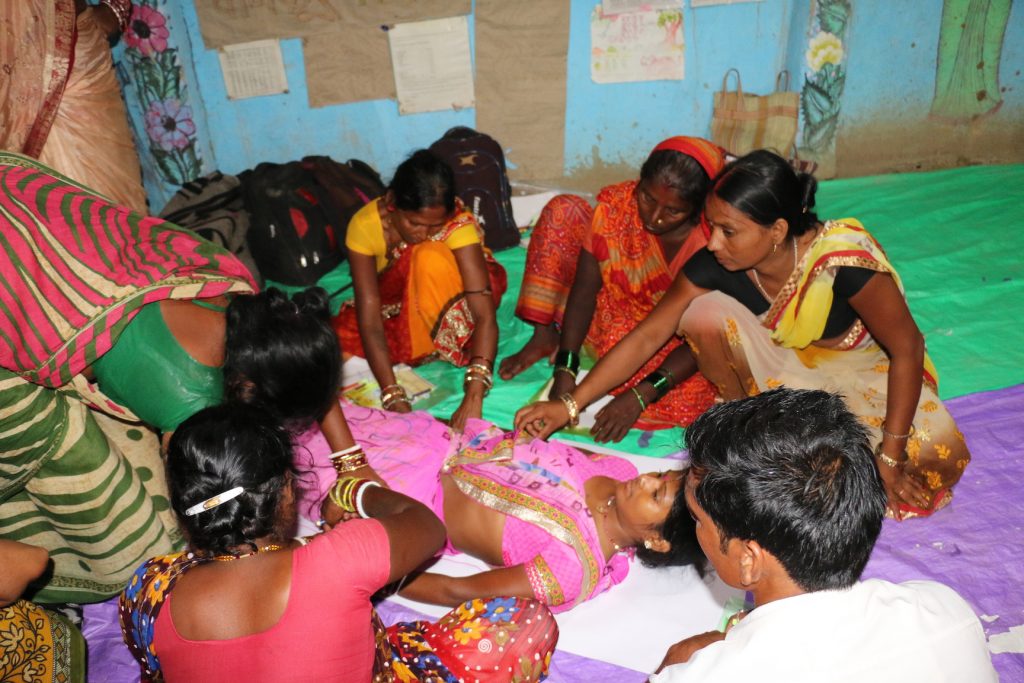 Women draw outline of a human body, which they will then fill with organs, during a health rights training workshop conducted by SATHI. 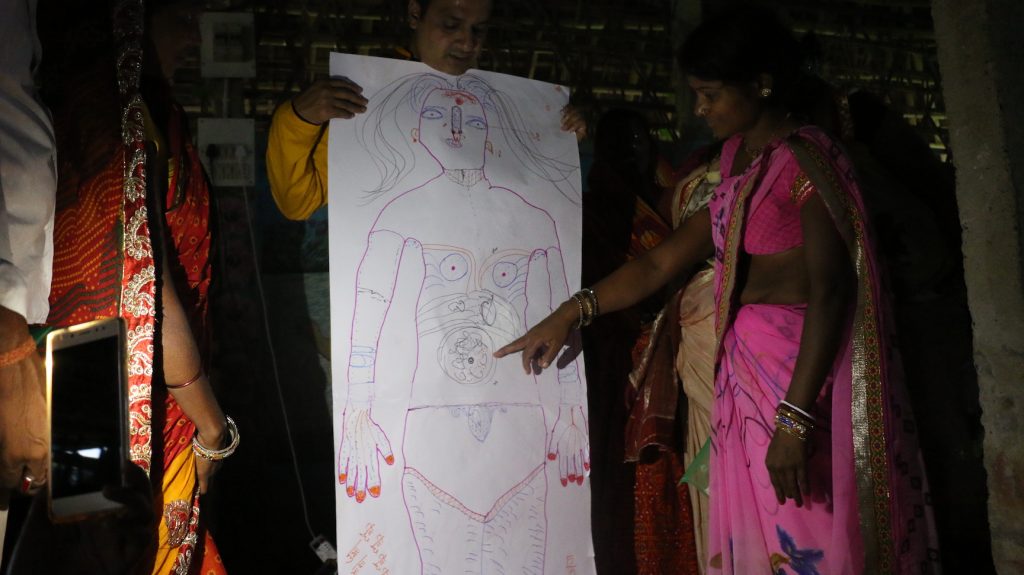 Woman talks about parts of the body, indicating them as drawn in break-out session.

With the broad structure of the body figured out, we focused on more specific things. I say “we” because the second day I got to go too! This was fortunate, because we learned about a very important topic:

HOW BABIES ARE MADE!

Yes, with the help of paper cutouts of a penis and vagina (plus surrounding organs such as the Fallopian tubes), we learned all about it. Immediately, one person, Jaymanti, asked, “If it’s just one egg and one sperm, how are twins, triplets, and so on born?” The presenter replied, “We’ll get to that later,” which I found to be rather unsporting.  (Apparently there was a film that night which would answer this question.)

Next, we listened to a story about a baby named Gudiya who got diarrhea. It was called “Gudiya ki Kahaani.” Sadly, Gudiya dies at the end. We discussed why this happened. Perhaps it was the bad advice from Gudiya’s grandmother — “Don’t feed Gudiya anything, because then the diarrhea will continue.”  Could it be the bad roads, which caused difficulty in getting to the hospital?

We also discussed the causes of the diarrhea in the first place: Stagnant, dirty water caused by the rainy season? The fact that it was Gudiya’s sister Mina taking care of her, not her parents? The mother’s milk spoiling after a long day of work in all sorts of weather? This last idea was quickly shut down by my mother, Aravinda, who wanted it made quite clear that mothers’ milk simply did not spoil.

Some other misconceptions were also dispelled: for example, that one should avoid eating very much food during pregnancy in order to “leave room for the baby to get big.”

“There are separate places for food and for the baby!” emphasized Nitin bhai, a Pune member of SATHI. “Khane ke pet yahan hai, aur bacche ke pet yahan hai. Beech mein bahut jaga hai!” “The stomach for food is here, and the stomach for the baby is here! There is lots of space in between!” He continued to explain that therefore, when one is pregnant, one should eat as much as one wants, thus feeding the baby plenty of food and allowing it to grow big and strong.

Later, there was a discussion about not telling other people, “don’t eat so-and-so” just because you could not eat so-and-so. “If my stomach is upset by eating brinjal,” I remember hearing, “I need not tell Shaku didi not to eat brinjal either!”

Not all sessions were discussions, though. We also sang, danced, and did skits! Here’s a video:

Finally, after a proud few days of deciphering and conversing in Hindi in Bihar, I proceeded to the blissfully Telugu-speaking Andhra Pradesh — still thinking in Hindi!