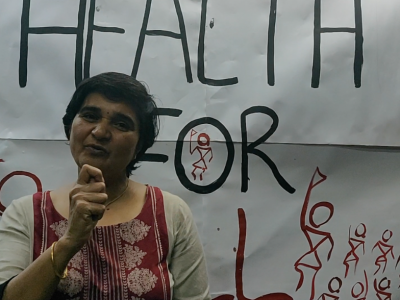 Dr Vaishali Patil, founder of Ankur Trust in Raigad District, Maharashtra talks about their work with the Katkari adivasi community, to obtain land titles and to confront the reasons the community is designated a “particularly vulnerable tribal group” or PVTG.  In collaboration with SATHI, Ankur Trust is working towards the goal of Health for All Now! by raising awareness and encouraging the community to take part in community based monitoring and multisectoral social audit to hold the government accountable for providing heath and related services to the community.  Thanks to Sujat Dandekar for translation from Marathi. 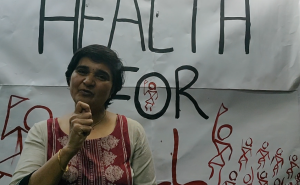 The main reasons are early marriages, repeated pregnancies and no civic facilities especially for healthcare. The fourth reason is that the tribe has been targeted for family planning (sterilization) and the fifth reason is alcohol addiction. All these issues will result in the destruction of the Katkari tribe. The Katkaris are the sons of the soil; they are the aborigines of Western Ghats and Sahyadris. How can we let the children of Sahyadris die?

Therefore, the Katkari tribe has been a priority for Ankur Trust since 25 years and the primary focus for us has been land rights. Only 4% of land is in the name of the adivasis, and the literacy rate of the Katkari adivasi community is around 10%. In this situation, we realized that land rights help in local integration of migrant communities and therefore our primary focus has been land rights. Ankur Trust has specially worked for homestead land rights, and was the first to receive titles from the state for homestead cases involving women of the Katkari tribe. However, even after all this work bonded labor has not ended.

The ruling that conferred land rights to the first 100 Katkari women can help around 1 Crore farm laborers in Maharashtra. While we were doing this work, we realized that bonded labor for the adivasis does not end. The main reason is that when there are epidemics during the rainy season, especially in areas where the forests have been destroyed, the traditional medical practice has been destroyed, there are no forests and no medicinal herbs, the adivasis are completely dependent on allopathic medicines and existing healthcare infrastructure including Government healthcare system.

The Government’s healthcare system has collapsed – subsidies have reduced, budgets have reduced – which has directly impacted the health of adivasis, especially Katkari adivasis. Therefore, even though all these years we have been working on land rights, forest rights, bonded labor, migrant workers, opposing SEZs (Special Economic Zones), and anti-nuclear movement, we realized that we should work for the adivasis’ right to receive good healthcare from the system. We saw this as an opportunity. 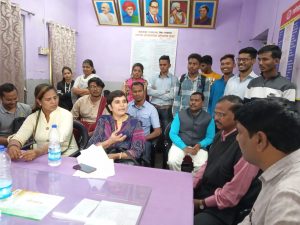 When the organization, SATHI, called us for a collaboration, we realized that this is an opportunity for us to get health entitlements for the adivasis. We organized an awareness campaign regarding health entitlements for 20 Katkari groups in Pen block of Raigad district. We carried out a base line survey and conducted focus group discussions. What we understood from these activities was that all the plans and campaigns for delivering healthcare, such as subsidies, free ambulance, ‘Matrutva Labh’ plan, ‘Pantpradhan Matru Vandana’ plan, etc., only look good on the television. In reality, these benefits do not reach women. They do not receive these benefits because they do not possess an Aadhar card. If they have an Aadhar card then the benefits are denied because the card is not getting linked.

Another shocking reality is that even ambulance services are not free. This is because the Government has not paid the contractors providing the ambulance services. The contractor asks the user to clear his pending bills or pay for diesel before using the ambulance. Many issues such as these came to light. The most important issue in Maharashtra, highlighted in the public hearing conducted in Pen on 6th June, is that many women who are supposed to receive INR 5,000 after their first childbirth do not get this benefit. The main reason is that while a woman’s Aadhar card has the father’s name, after childbirth, the woman’s name registered at the medical facility would incorporate her husband’s name. Bank staff refuse to open accounts due to this discrepancy. Even if the account is opened, there is a mismatch between the name registered in the banking account and the name registered at the medical facility, leading to denial of the subsidy.

A second issue is when these women go to open bank accounts. There are already accounts that have been opened under ‘Jan Dhan Yojana,’ however there is no money deposited in these accounts. This has led to the accounts getting defunct. Another scenario is when standard accounts are opened with a bank instead of the ‘Jan Dhan’ account and let’s say INR 1,000 is deposited in it. Even when there is no condition or strict requirement for maintaining a minimum balance, in the month of March, which is the financial year-end, bank staff trying to meet their savings account and fixed deposit targets, many a times deduct a fee from such accounts stating non-maintenance of minimum balance.

Such issues are not limited to Adivasi women but generally affect all poor women – they may be from Kumbhi, Agri, Vanjari, or Nomadic tribes. The Government system has fallen ill. There is lethargy. There is no political will. Until such time that there is political will to provide access to healthcare, these systems will not work. Globalization, privatization and liberalization, which have led to the privatization of public institutions, have also impacted the healthcare domain. Therefore, in the public hearing conducted by Ankur Trust at Gandhi Vande Vachnalaya in Pen on 6th June 2019, a lot of adivasi and Katkari women were present –  130 men and women had come to raise their issues.

When we started working with these groups we were initially apprehensive if the women would speak up. They were not community leaders or part of the budgeting committee. They had never ventured out or spoken in front of people. We were anxious if these women would speak, or even attend the event. However, one of our community leaders, Ganesh Waghmare, conducted surveys and focus group discussions. He told people how his mother had to face injustice. Motivated by his talk, many women came to the event carrying their children and spoke about how even after so much time post childbirth – the children are now big enough to walk – they have not received the benefit of INR 5,000 from the Government. The women shared similar stories along with their grief and pain, with the organizers. Public hearing is a democratic space.

In Meghalaya, they have introduced social audit in 11 different sectors and made it a law. This law provides the public with an instrument to question the arrangement, get answers, and monitor for accountability. Ankur Trust, in collaboration with Sathi, used this democratic space in the form of the public hearing. The way people made use of this public hearing assured us that in the current environment of shrinking democratic space this strategy is a powerful tool. It is a powerful tool to bring transformation in society, mobilize people and create political will for health for all.

After the public hearing conducted on 6th June 2019 at Pen, a lot of women started visiting the Ankur Trust office. They brought along their documents, Aadhar card, bank passbook and children, and registered their complaints at the office. When the complaints started flowing in, we realized that we should use the various redressal systems created by the Government. The Government created these redressal systems but did not work towards raising awareness in the public on how to use them. With so much illiteracy, how can you expect people to use a computer and register their complaint online? The literacy rate for Katkari adivasis is only 10%. Migrants make up more than 50% of the population. Their livelihood depends on daily labor. How can you expect them to go and register complaints on a computer?

Through our outreach strategy, we trained the local, educated Katkari community leaders in using technology to register complaints online, thus enabling them to help their communities. I feel that the movement for enabling public accountability of various systems is not a project, it is a people’s movement. It is a movement that can be taken forward in an impactful way and people have the capacity and strength to do that. Due to the overall process, people have developed self-belief, hope and belief that something can be achieved, not only by them but also by their communities. Even though they do not trust the Government, they trust the strength of society. The process that created this trust and self-belief is important.

Dr. Vaishali Patil talks about the campaign for Health for All Now! in Raigad District, Maharasthra, utilizing the processes of community based monitoring and multi-sectoral social audit organized locally in collaboration with Ankur Trust and SATHI, supported by AID. 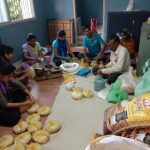 Reaching the unreached villages in Gujarat 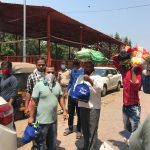 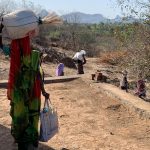 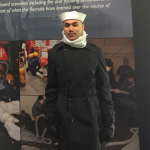 Courage in the Time of Coronoavirus 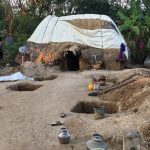 Women at the forefront of efforts in West Bengal 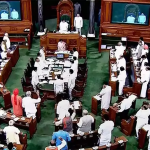 What are Members of Parliament doing?