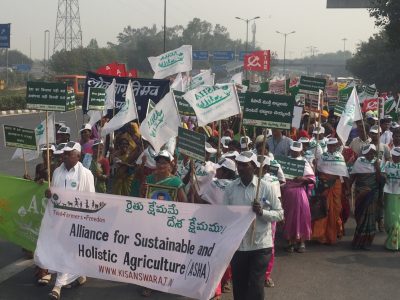 Tens of thousands of farmers from several states reached Delhi to demand that parliament pass two bills that aim to improve farmers’ livelihood, by guaranteeing remunerative prices and freedom from indebtedness.  AID Jeevansaathi Kiran Vissa talked about these bills in his May 2018 address to the AID Conference. 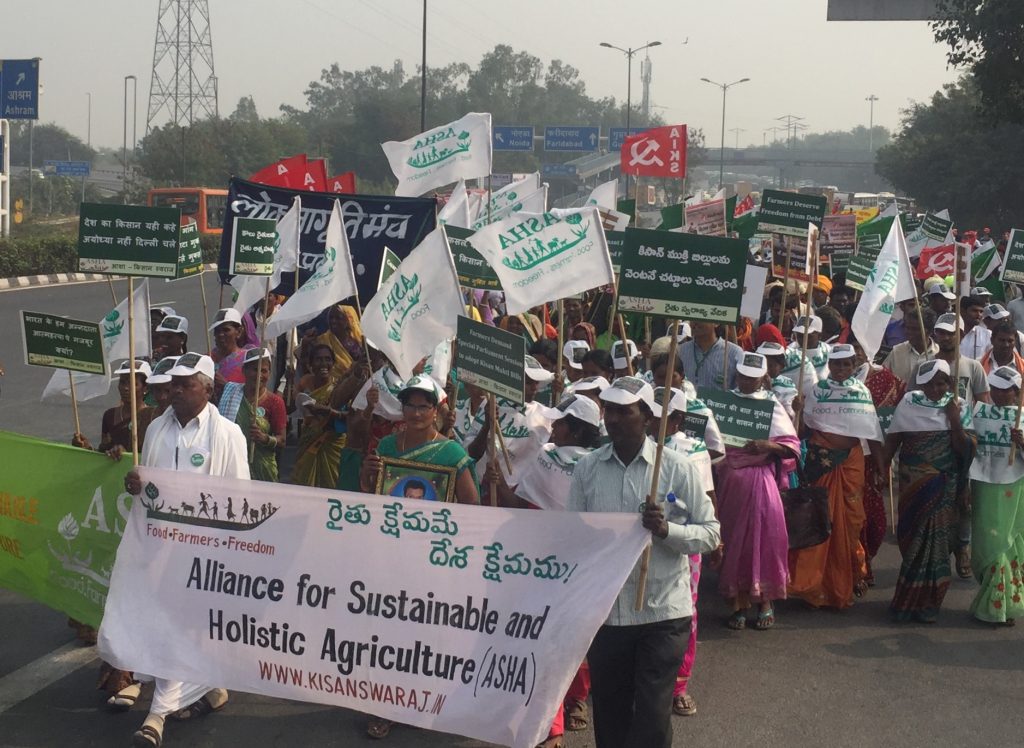 Thousands of farmers march in Delhi to demand passage of Kisan Mukti Bills.

Farmers in the country are in a deep crisis and there is large scale displacement from farming, other than farmers committing suicides in large numbers. Other sectors don’t seem to hold any solutions for the current set of farmers who find farming unviable, are obtaining very low incomes, are burdened by their debts, are going under with each natural disaster that strikes them, and who find their life and profession undignifying. The situation for smallholders, tenant farmers, rainfed farmers, women farmers and of adivasis who are subjected to resource-grabbing etc. is particularly difficult, while it is generally difficult for most farmers in any case.

As a first step to mitigate the immediate situation, more than 200 farmer organisations decided to join hands and fight unitedly on two common demands: freedom from indebtedness, and guaranteed remunerative prices. They formed themselves into a joint platform called All India Kisan Sangharsh Coordination Committee (AIKSCC). It is worth noting that these unions represent various political ideologies and some leaders were part of NDA formation too. Many are not affiliated to any political party and are independent farmers’ organisations. More about AIKSCC can be found at www.aikscc.com .

In November 2017, a massive Kisan Mukti Sansad was organised for two days on Parliament Street, which also saw a special women farmers’ Parliament. Many women farmers from families which had experienced a farm suicide were part of this event. As a rare occurrence that happens when farmers converge to demand their rights, there was massive media coverage for this mobilisation, as can be seen here: http://aikscc.com/media-coverage/ . In this Kisan Mukti Sansad, two Bills were tabled, created by AIKSCC. Please note that this is the very first time that farmers’ movements are asking for legal rights as their demands, whereas many other people’s movements have already secured such laws (foremost being the women’s rights movement which had secured many progressive laws for women in this country over the decades, other than the right to education, right to rural employment, right to food, right to information movements).

After the Kisan Mukti Sansad one year ago in November 2017, in more than 60 locations, detailed consultations were organised to obtain feedback from farmers, farm union leaders, legal and agricultural experts and the Bills were revised by March 2018. These Bills were then discussed in a Round Table in Constitution Club where 21 political parties lent their written support to these Bills and also called for a Special Session of the Parliament to discuss and pass these Bills. A committee of political party leaders was formed and in the Parliament House Annexe, a one day meeting was held to fine-tune the Bills clause-by-clause. These Bills were then introduced into the Lok Sabha and Rajya Sabha as private members’ bills. 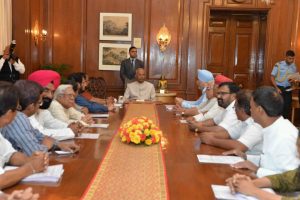 AIKSCC leaders also met with the President Shri Ramnath Kovind, urging him to convene a Special Session of Parliament for discussing and passing the Bills. In the month of May 2018, on the day that the First War of Indian Independence was started in 1857, in hundreds of districts across the country, memoranda signed by lakhs of citizens were handed over to district collectors, addressed to the Chairperson of Rajya Sabha and Speaker of Lok Sabha, urging them to convene a special session. After this, June 6th was marked by AIKSCC as Mandsaur Shaheed Kisan Smriti Diwas in numerous places around India.

AIKSCC has also been actively engaged with the issue of MSPs that got declared for Kharif and Rabi crops of 2018 and has been following up on the ground to watch the prices being realised by farmers. It is clear that commitments by the government are not being met on both fronts (MSP amounts fixed being far lower than what farmers should get at C2+50%, and realised prices being far lower than MSPs announced). 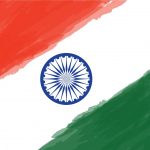 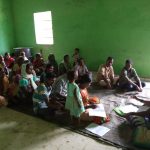 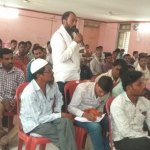 Last mile healthcare – their right and people demanded it!