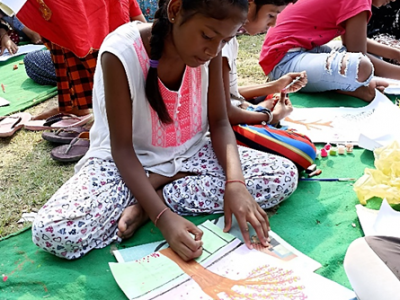 Isha Gupta recently visited Bawana resettlement colony in Delhi where AID has been supporting Partners in Justice Concerns (PJC), an organization that works for the education of young women of migrant labor families displaced by construction in Delhi. She shares her experiences:

As part of the city beautification drive during the 2010 Commonwealth games, thousands of migrant labor families were displaced from central parts of Delhi. Forced to live in resettlement colonies that are at Delhi’s peripheral locations, these communities still struggle for basic human rights of education, clean water, and sanitation. Streets filled with garbage and open sewer flow in front of houses are a common sight in these colonies. Rains worsen the situation further, when the sewer water overflows into streets and enters into people’s homes. Bhalaswa Resettlement colony, for instance, is located next to a landfill site which contaminates the groundwater. Delivery of water tanks is infrequent and unreliable, and access to clean water is a constant challenge. Schools offer limited resources and are usually located far away, which takes a heavy toll on education, especially on the young women of these communities.

AID has partnered with Center for Community Support and Social Development (CCSSD) to empower these youth to cope with the impacts of displacement through education and awareness. Its Delhi chapter, Delhi Artists Youth Forum (DAYF), was founded by Sadre Alam in 2012. DAYF presently works with over 1000 youth in the resettlement colonies in Bawana, Bhalaswa, Rohini, and Khanpur. In May 2022, I got an opportunity to meet the inspiring young women volunteers of DAYF, who are leading the change in their community in Bawana resettlement colony.

Land was allocated to build a school in Bawana resettlement colony when migrant workers were resettled here almost 12 years ago. However, its construction did not start until a decade later, and is still incomplete, forcing children to travel a long distance to attend school. Those who finish school end up enrolling themselves in a college that allows them to work part-time and support their families, instead of getting a formal college education. The primary modes of income in the community — jobs in the nearby industrial area, work as domestic help, or piece-rate work making—bindi, bangles, cleaning wipers etc., all took a serious hit during the Covid pandemic. Financial constraints led to several kids dropping out from schools, and young women being married off in a rush. 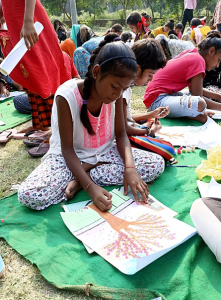 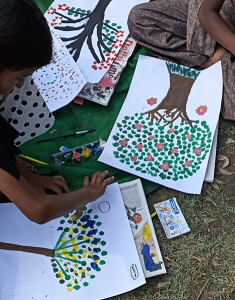 DAYF empowers and generates awareness among young women of the community through art and education. This picture was taken during my site visit to Bawana resettlement colony, where DAYF volunteers had organized a painting program. Based on the environment day theme, the girls drew a tree expressing their imagination and creativity. 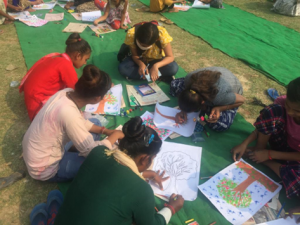 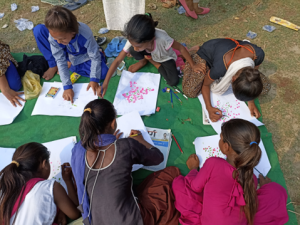 The painting program gave me an opportunity to interact with several young girls of the community. They mentioned that the DAYF volunteers always help them with schoolwork, and that the DAYF center provides an effective learning space, away from the distractions of household chores at home. Their eyes lit up when they told me how much they enjoy the dancing and theater programs organized by DAYF.

About 100 girls participated in the painting program. While equal opportunity and freedom of expression is an ongoing struggle for young women living in these neglected parts of Delhi, DAYF has provided a platform and a safe space for them to organize and express, take leadership, and change the course of their lives.

Isha is a Postdoctoral Researcher in the Department of Aeronautics and Astronautics at MIT. She was introduced to AID’s grassroots efforts in India during her PhD in Ann Arbor, Michigan. She recently visited Bawana resettlement colony in Delhi where AID has been supporting Partners in Justice Concerns (PJC), an organization that works for the education of young women of migrant labor families displaced by construction in Delhi. PJC also uses cultural forms to create awareness among these women about societal issues.