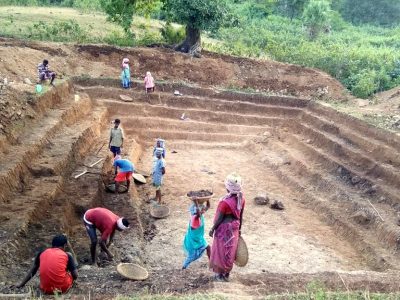 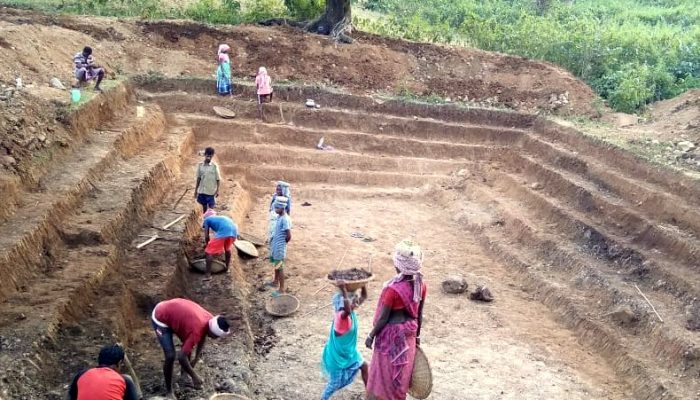 In June 2015, the Central Water Commission (CWC) of India’s Water Resources Ministry (MoWR) carried out an on the spot study of water situation in drought affected areas of the country and brought out a report under the same title. The study covered most of the states where drought is a recurrent problem, including Rajasthan, Telangana, Karnataka, A.P., U.P., Bundelkand, Odisa, Gujarat and Maharashtra. Naturally, such a report by India’s highest technical body for water management covering vast stretches of the country was an important indicator of what the government plans for tackling drought.

The report gave some immediate steps to be taken, and then recommended some longer term measures. It is these longer term measures that are of real importance if one is to address drought in the future in an efficient manner.  The report first presents its understanding of why droughts are occurring. It says, “Main cause of water scarcity in the country is consecutive failure of monsoon, resulting low storage in dams, during the last two years.” This of course is tautological – we know that less rain is a primary cause of drought. Which is why we can’t talk of preventing drought but rather of drought-proofing –how to ensure that we don’t suffer from the impacts of droughts and have sufficient water for domestic use, cattle, and agriculture even if there is a failure of monsoon.

The report then talks about the various long terms measures taken to “secure the future”. These essentially include funding of major and medium irrigation projects (which means large dams), water conservation projects, some practices to improve water use efficiency and “at macro level, the Inter Linking of Rivers to transfer water from surplus basins to deficit basins.”

In short, this is nothing but a program driven by large dams and infrastructure projects, with some talk of water conservation. This is business as usual because the water resource development program of the government has essentially been centered around such large infrastructure projects (and massive groundwater extraction, which is carried out by private individuals). The efficacy of the large dams and programs like river linking in addressing droughts is highly questionable. For example, it is important to see that the state with the highest number of large dams in the country is Maharashtra, with some 2070 dams out of the total 5300 dams. Yet, Maharashtra repeatedly and regularly faces severe droughts. The state with the next highest number of large dams are M.P. (900) and Gujarat (620). Yet, Gujarat is also affected by drought regularly. There are many detailed analysis of why large dams are not the solution for addressing droughts; as well as numerous analyses of the problems with the river linking projects and how they too are not likely to successfully address droughts.

With current plans being on the same lines, there are serious questions about the drought-proofing plans of the government.

There are two components that are of concern here. One is the reliance on large infrastructure – which has not only failed to address droughts, but which also has serious social and environmental effects. Due to the massive protests and movements over the last 3 to 4 decades challenging these impacts of large dams, the government has lately been advocating smaller, decentralized rainwater harvesting measures. This is a welcome step, for such an approach has lesser social and environmental impacts than large dams and are more equitable in distribution of the benefits. Yet, we should also understand that by itself, it will not produce more water than large dams – the total water available in a river basin is fixed, as per the rainfall in the basin. One can either capture it in large centralized structures, or in many decentralized places. So the decentralized approach is better, and yet, it’s a moot question  whether the government is really committed to it, because government plans still mainly consist of large dams and massive projects like river linking.

The second matter of concern is whether it is large dams or decentralized water harvesting, both are supply side measures. In all the measures suggested by the government, there does not seem to be any serious attempt to address the issues on consumption side. Unless this is done, no amount of supply side measures can work.

There is a need to look at the consumption of water in all sectors. If we look at agriculture, which is the biggest user of water in the country – it uses close to 80% – one of the  major issues with agriculture is that of growing water intensive crops in areas with water stress. In many places, the cropping pattern is not in conformity with the eco-climatic characteristics of the area, and this means crops use water far more inefficiently. Prime examples are the growing of sugarcane in western Maharashtra  and paddy cultivation in Punjab.

Unfortunately, whenever irrigation is introduced in an area – whether through surface or groundwater – we see a clear shift towards water intensive crops even if the area is not suited for it. One of the main reasons for it is the market support given to these crops by the government  in terms of the minimum support price (MSP) and assured procurement. While such support is critical to help farmers sustain, it is important to reorient this support in a manner that will support crops that use less water.

Similar is the case with urban water use, which is growing rapidly, both in terms of absolute quantities and also in terms of per capita use. Urban water use can have significant impact on the surrounding areas.

To understand why shifting to decentralized water harvesting approach alone would not serve the purpose of drought-proofing, it is enough to look at some of the successful examples. Two of the most successful examples where community driven, decentralized water harvesting  approach with small interventions has tackled water scarcity are the work of Tarun Bharat Sangh in Rajasthan, where the dead rivers Arvari and others were revived and the work in Hivre Bazaar in Maharashtra where agriculture prosperity was achieved in a highly drought prone area. In both the cases, apart from decentralized rainwater harvesting measures, the most important factor was that the communities decided to completely avoid water intensive crops, and draw groundwater only using dug wells, and eschew the use of tubewells.  It was this attention to the use or consumption side that has been the secret of their success.

Lastly, restrained and judicious use of groundwater – is one of the most critical measures for drought proofing. This is because groundwater is the best insurance and back up in times of drought.

Thus, any program that aims to address droughts on a long term basis must have as its components water harvesting and storage through a decentralized approach, judicious use of groundwater and a serious attention to the uses that the water is being put to, avoiding water intensive crops and encouraging crops suited to the local eco-climatic characteristics in a manner that can also help the farmer make a decent living.

Unfortunately, all these elements are absent in any meaningful manner from most of the plans of the government for addressing drought and water stress. No wonder, drought has become an annual phenomenon.

(Shripad Dharmadhikary is an activist, researcher, and coordinator of the Manthan Adhyayan Kendra that studies water and energy policies with a focus on equity, sustainability and justice. His interests include water policy and projects, dams, rivers, environmental flows, inland water transport, water privatisation and coal-water nexus. A graduate engineer from IIT Bombay he was earlier an activist for 12 years with the Narmada Bachao Andolan. He writes extensively on water issues.)