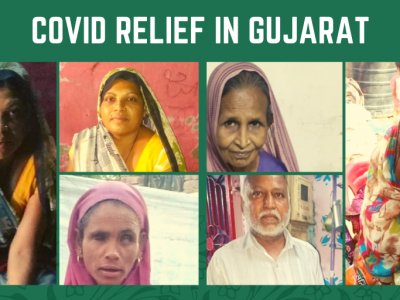 11
May
Centre for Development (CfD), our partner in Ahmedabad, Gujarat, has been at the forefront of ensuring that Covid relief efforts reach the last mile. Their efforts are a great example of the interconnected approaches AID has been supporting to tackle the Covid crisis – food and medical support, community awareness and advocacy.

AID Responds to COVID Donate to COVID Relief Fund
Food Support
CfD has been primarily providing food support to families in distress.
Medical support
On request, CfD has provided medicines to those with non-Covid ailments who have been unable to get their regular medicines due to the closure of medical shops in their areas.
Community awareness
Health surveillance
CfD has been helping a number of people in the community by advising them on steps to take in case of COVID-19-like symptoms. Anyone contacting them with such symptoms have been requested to isolate
themselves from other family members, take regular medication and monitor their health for the next 2-3 days. They have so far received about 77 phone calls from people who suspected they had symptoms;

many of them turned out to be due to fear and panic, but some of them were genuine, but turned out to not be due to CoViD-19. They also observed that people were mortally scared of the quarantine system of the government (in case they were to be taken to a quarantine centre).

CfD has been monitoring the situation of the families in distress, especially in terms of their access to the relief package announced by the government. As soon as the government relief work, especially through the PDS system started functioning, CfD staff were in continuous touch with the communities to know if they received their entitlement of cereals, pulses and sugar. Over 80 people from different areas were contacted over phone to ascertain whether they received their entitlement through the PDS, and volunteers/staff also visited areas to personally see the distribution going on in several areas.

CfD is also part of a national effort along with National Campaign on Dalit Human Rights which has developed a mobile app which is being used to collect information from 15 states including Gujarat – information on whether the marginalized communities (SC/ST/OBC/Minority/DNT, and vulnerable groups among them such as the disabled, senior citizens, single women, sexual minorities and transgenders) have been provided awareness on precautionary measures to be taken and whether these communities have received the relief entitlements. CfD has 10 volunteers engaged in this inclusion monitoring using the mobile app, mainly in Ahmedabad city and some of the rural districts. The data collection would continue for 10 days, reaching out to over 1500 families from marginalized communities (SC, ST, OBC, Minority), following which the app would provide real time information on the number of people

excluded from entitlements. The list of such people and the relevant
applications to the competent authority in the district as well as the state
government would be generated through the app and submitted for
necessary action.
Share Post: 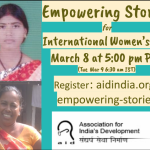 Right to Breathe in Delhi and beyond: Panel Discussion
A Cleaner Greener 2021 is on the way!