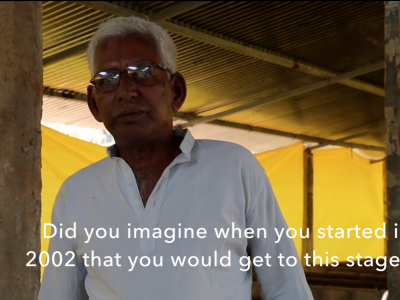 Along with his family in rural Srikakulam, Appalanaidu has managed fairly well.  One thing that has always bothered him, however, is that young people felt that the only opportunities worth pursuing were in the cities.  He had heard about organizations that brought new programs to villages that depended on local resources and know-how.  So when AID-India started working in Santakavita mandal, he was one of the first to join.  In 2002, he along with other AID-India workers travelled to Anantapur district for a meeting convened by the Jan Sahyog Trust and hosted by the Timbaktu Collective.  One of the sessions concerned vermiculture, the practice of raising earthworms for the purpose of using their compost as organic fertilizer for agriculture.  Over the years he has been involved with various AID-India programs and continued growing his earthworms long after the initial support from AID-India.

Appalanaidu started with 500 grams of worms in 2002 and today is one of the key people supplying worms for 15,000 hatcheries throughout Srikakulam District.  How did he do it?  Hear him tell the story in his own words.  Appalanaidu and his Worms. 6 minutes, Telugu with English subtitles.