BECAUSE WE CAN help ensure that every child has the opportunity for a bright future and no one sleeps hungry, that farmers can earn a dignified livelihood, that everyone has an opportunity to earn a fair living wage without discriminatory barriers, and that  development is equitable and sustainable.

EVERYTHING WE CAN,  because the problems are interconnected, and a holistic approach with projects and campaigns in agriculture, health, education, community empowerment, relief and rehabilitation is essential to address their root causes. An underlying reason for poor health and malnourishment may be the corruption in access to a ration card or anganwadi services.

THE BEST WAY WE CAN, by working with some of the best social workers and groups in India. We have long term partnerships with NGOs that have taken many ideas from inception to large scale, impactful projects. Some AIDers have gone back to India to actively work at the grassroots, and AID benefits from their experiences and insights. AID volunteers have visited all the projects, deepening our connections and our understanding.

Donations to AID are tax-deductible in the USA. It is a registered 501(c)(3) non-profit charitable organization with tax ID 04-3652609 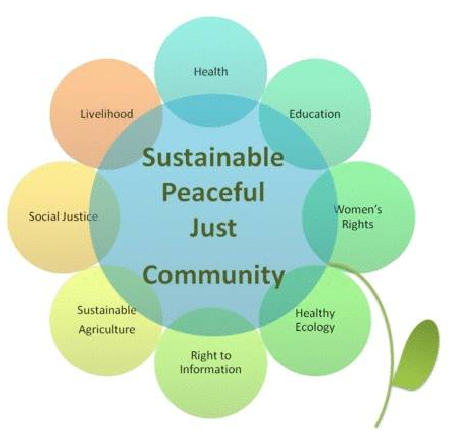 AID’s holistic vision enables it to address underlying causes rather than just responding to symptoms, by using powerful tools for bringing out change, such as campaigning against corruption, in addition to constructive and creative work through various projects.

To give an example, AID has supported alternate energy projects such as solar, wind, micro-hydro and pedal power to light up homes and schools in remote tribal villages. Typically it costs AID about $100-$200 to bring electricity to an unelectrified household through such project work. Thus to create infrastructure and bring lights to 1000 households, it would take $150,000 or so.

On the other hand in Srikakulam district villages at a cost of only about $3000, nearly a 1000 households got electricity via AID, after people fought the $50 bribes that officials in the electricity department were taking per connection. Day wage labourers earning $2 per day can pay their monthly electricity bill ($2/month), but not bribes to get the initial connection, and this was the bottleneck that AID understood, fought and got rid off. Thus while alternate energy projects are needed for tribal villages where there is no grid, fighting corruption is cost effective and addresses the causes behind lack of access to electricity, in villages in the plains where there is grid infrastructure.

Throughout the AID site you will find a deeper understanding of issues, courage to face injustice and commitment for change through projects and campaigns, an approach that causes large scale transformation, due to its sheer efficiency. Your support as donors and involvement as volunteers goes a much longer distance the AID way.

Starting with a simple idea that problems are interconnected, so must be the solutions, AID grew as people came together to be part of the solution. What have AID volunteers learned from the grassroots about the meaning of development and the meaning of India?

25 years ago AID started supporting non-governmental organizations (NGOs) working in under-served areas.  Some of these NGOs ran schools or health camps, dug wells, or trained youth in vocational skills.   Adapting some of their effective practices, AID initiated efforts in other needy villages, supplying ragi to malnourished children, promoting kitchen gardens and in the process, getting to know the priorities of people living in poverty.

When we asked why the wells were dry, why the poor were hungry, or why they spent more on illness than the non-poor did, we found injustice behind every answer.

Organizations concerned about poverty in the villages had to decide:  should they fight these injustices so that people could obtain services by right and have a voice in their own development?  Or should they provide services?

We found that the stand taken by the most effective, mass-based groups was to link the two, both on principle and as a matter of strategy.  Organizations that provided services worked in solidarity with those that trained people to monitor and advocate for public services, and also questioned the policies and practices that led to denial of rights to basic needs such as food, water, health, education, land and livelihood.  Movements questioning unjust policies and paradigms of development supported efforts to practice alternatives and demonstrate models that the government could adopt at a large scale.  Creating alternatives, known as Nirman, went hand in hand with challenging injustice, known as Sangharsh.

In these approaches, the poor, marginalized and oppressed people are not passive beneficiaries but active agents of change whose results will benefit society as a whole.  The non-oppressed who join hands in struggle learn to speak truth to power, even if it means asking uncomfortable questions about their own role in social, economic and ecological system.

This leads to the third component of holistic development: responsible living, known as Seva.

While opposing deforestation or expressing solidarity with farmers in crisis, were we eating foods harvested sustainably, with fair wages paid, and without wasteful packaging?  Or were we consuming the fruits of destructive development?  Never underestimating the role of thoughtful personal actions, AID volunteers have supported one another in the effort to be the change: conserving water, avoiding disposables and packaged goods, questioning caste, class and gender injustice and striving to practice equality.

Even when one achieves success it may appear to be “a drop in the ocean.”  By working in a spirit of unity, we can make our efforts, our solidarity, and our commitment represent, as the poet Rumi once said, “the mighty ocean in the drop.”

How AID volunteers work towards sustainable development through the three synergistic approaches of sangharsh, nirman and seva.

Seva:  Live Responsibly, Be the Change

AID at a glance

Inspired by AID, volunteers across the globe have started the following independent organizations:
AID-India with 80-G tax deductible status in India, AID-Aus in Australia, AID UK in UK and AID-Canada in Canada.

AID does not endorse or support any political party or electoral campaign in any country.