Madhusudan Das coordinates work in 8 villages of Orissa through an organisation called Abhiyaan. Known as “Madhubhai” he has travelled throughout India and abroad with the National Youth Project, led by noted Gandhian Sri Subbarao. (bio from 1999 proceedings)

DEAR BROTHERS AND SISTERS: having seen you I feel we have been working together since the past 20 years. Since AID volunteers believe in participation, we should begin at home. I would like to sing a song, and I would like everyone to participate.
In India we cannot be miserly, singing only of India, it is the right time to go to Jai Jagat, victory to the world, not victory to India only.
[Leads everyone in singing Jai Jagat]
jaya jagat jaya jagat jaya jagat pukarojaa
jaya jagat

[Explains]: justice should be respected, no difference among colours, religions, etc.
Dear friends, you all talk about grassroots work. Wherever I go in this country and abroad, you find there are roots but there is no grass. I think it is the right time for AID now to pour water on the roots, then only the grass will come up. Yesterday we went with Balaji to the villages. If you talk to the youth of this country, they are well aware of Juhi Chawla and Manisha Koirala, but do they know Laksmi of Nemeli and other volunteers of Nemeli?
The highly educated youth like Balaji, Aravinda behn, Ravi bhai, Kiran bhai, Sudhakar bhai, are all aware of the grassroots workers. This is the revolution of AID in the 20th century. This is a very good linkage from the heart of the youth of one country to the heart of the youth of another. I have been told to speak about Orissa.
I have been visiting USA, Germany, England, I met some volunteers of AID in Maryland. I found Padma of AID volunteering, selling T shirts there. I asked her, what is the matter why are you selling T shirts. She said, we are selling the T shirts, we are raising money for work in India. Then my heart got connected.
In Maryland I gave a 35 minute talk on the strategy of AID and clear cut vision for India. AID-India should not be like other organisations of India. Though AID US is supporting some projects like Abhijaan, my organisation comprises 7-8 youths. India got independence 51 years back, but when talking about gram swarajya, when I came back to my villages I found people suffering from so many different problems. All the women were being dominated by the males, politically, economically, educationally, they are being harassed.
So I thought, what should I do? My first strategy was to take up 6-7 villages. At present our motto is to see all these villages as ideal villages, to see all the children physically, mentally, economically, spiritually stronger.
Mahila mandals, natural farming are some of our programs. Recently I visited Dr. Bhavalkar in Pune and got some advice on compost. We have taken ½ acre of land and are starting with the natural farming system. Abhijaan is also trying to organise both male and female daily labourers.
We have also introduced yoga and meditation in the balwadis. We are also following the Ashtanga Yoga of Patanjali sutras, because we believe in self-transformation.
There was also untouchability in our areas. General castes do not allow SC/ST people even to sit on their verandah. Abhijaan has initiated better relations between the castes.
Instead of funding others, I suggested to AID that it setup its own center where it can set up its own demonstration fields. We can then experiment various objectives. Abhijaan will be there to cooperate on the works of AID. Orissa can be a patch of the field where volunteers from all parts of India can come to observe the work on the field.
We are also planning to start a massive health camp among 10,000 students. We have sent a project proposal on this already.
I am sure that AID will reach not only all the states, but all the villages of India and the time will come when even to other third world countries AID will reach.

Shrinaath:  you mentioned a group of 7-8 people, are they all local?
Madhubhai:  yes, local
Shrinaath:  are there women in that group?
Madhbhai: yes.
Prakash:  have you worked with other funding organizations?
Madhubhai:  no
Ravi: he was working with National Youth Project, which was funded
Madhubhai: yes I was working with Subbarao.  He is a life member of the Gandhi Peace Foundation in Delhi, where he stays.
Kiran:  you have a plan for 10,000 people to do a health camp
Madhubhai: we want to concentrate on the preventive aspect. 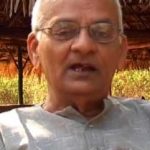 What a Rupee Saved Can Earn
Approaches to Swaraj
Jantar Mantar, a Children’s Science Magazine
Rural Marketing and Enterprise
Development and Equity